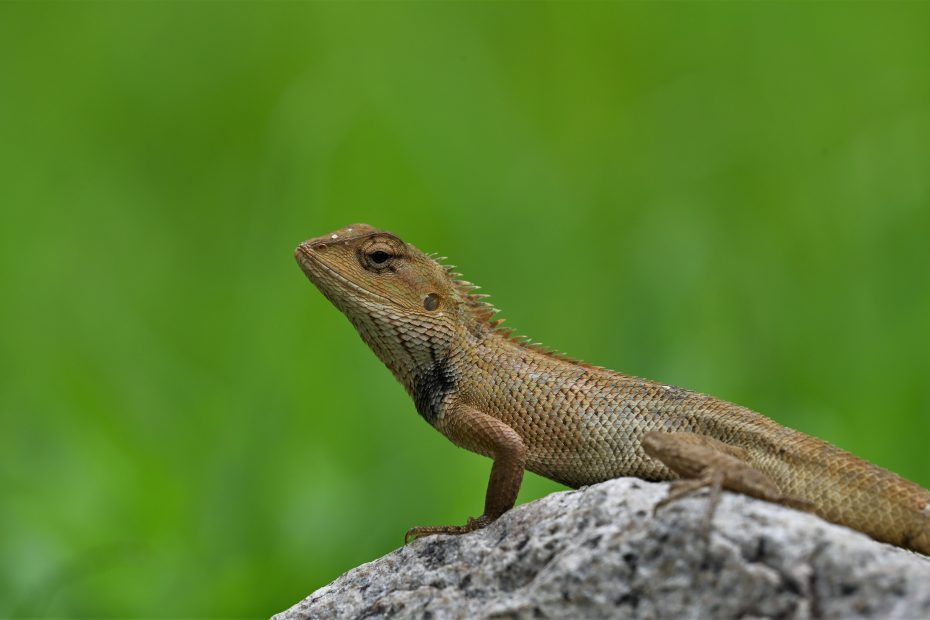 Back in the old days, Brother Lizard was an awful lot like Brother Frog, meaning he could sit upright like a dog.  Things were like this for quite a spell.  Then one day when they were walking down the road by their swamp, Brother Lizard and Brother Frog spotted some real nice pastureland with a great big pond that was on the far side of a great big fence. Ooo did that land look good.  Looked like a great place for Brother Lizard to catch insects and other good food.  And Brother Frog wanted a swim in that big ol’ pool.
Brother Lizard and Brother Frog went right up to the fence, which got bigger and bigger as they approached.  It kinda loomed over them, as big and tall as they were little and small.  And the boards of that fence were mashed together real tight, and deep into the ground.  It was too tall to hop over, and neither of them was much good at digging, so they couldn’t go under.  That fence said Keep Out pretty clear, even though no one had put a sign on it.
Well, Brother Lizard and Brother Frog sat beside that tall fence with their bottoms on the ground and their front ends propped up, ‘cause Brother Lizard could still sit upright then jest like a dog, and they tried to figure out how to get through the fence.  Suddenly, Brother Frog saw a narrow crack, low to the ground.  “I’m going ta squeeze through that crack over there,” he croaked.  “Lawd, help me through!”  And Brother Frog hopped over and pushed and squeezed and struggled and prayed his way through that tiny crack until he popped out on t’other side.
“Come on Lizard,” Brother Frog called through the crack.
“I’m a-coming!” Brother Lizard called back.  “I’m a-going to squeeze through this here crack, Lawd willin’ or not!”
Brother Lizard scurried over to the crack in the fence, and he pushed and squeezed and struggled and cursed.  Suddenly, a rail fell down and mashed him flat!  After that, Brother Lizard couldn’t sit upright anymore.  And he never did get through that fence to eat them insects, neither!