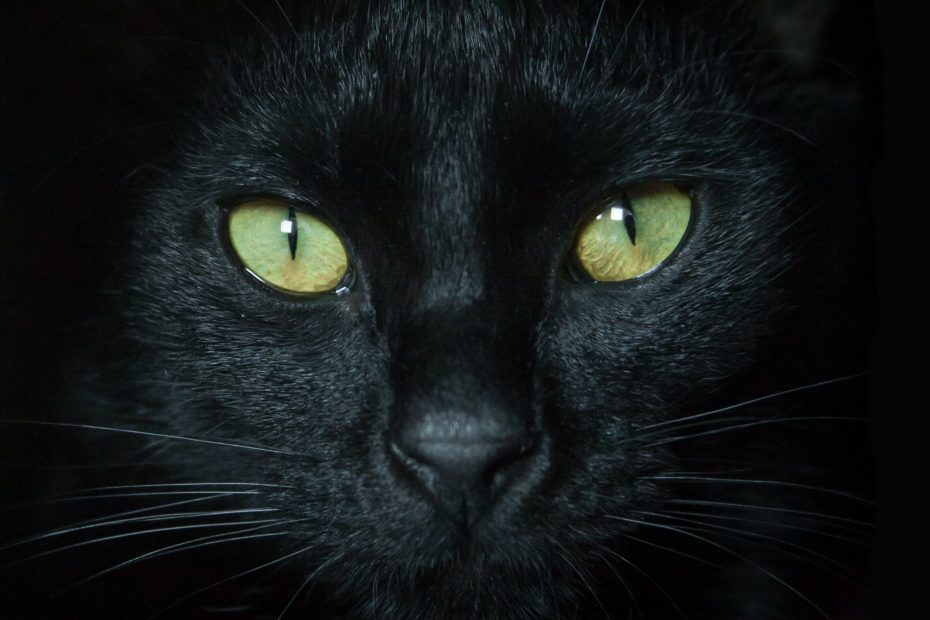 A preacher was riding to one of the churches on his circuit late one December evening when darkness fell. It was about to storm, and the only house nearby was an old mansion which was reputed to be haunted. The preacher clutched his Bible and said: “The Lawd will take care o’ me”.

He went into the mansion just as the storm broke. He put his horse into the barn and made his way into the house. The door was unlocked. He went into a large room which contained a fireplace that filled one wall. There was wood laid for a fire. He laid a match to it. Then the preacher sat down to read his Bible.

Gradually, the fire burnt down to a heap of coals as the storm howled around the mansion. The preacher was roused from his reading by a sound. He looked up from his Bible. A very large, black cat was stretching itself. Then it walked to the fire and sat down among the red hot coals. It picked a coal up in its paw and licked it slowly. The cat got up, shook of the ashes, and walked to the foot of the preacher’s chair. It fixed blazing yellow eyes upon him, black tail lashing and said quietly: “Wait until Emmet comes”.

The preacher jumped from Genesis to Matthew in shock. He had never heard of a cat talking before. Nervously he kept reading his Bible, muttering to himself, “The Lawd will take care o’ me.”

Two minutes later, another cat came into the room. It was black as midnight, and as large as the biggest dog. It lay down among the red-hot coals, lazily batting them with enormous paws. Then it walked over to the other cat and said: “What shall we do with him?”

The first cat replied: “We should not do anything until Emmet comes”.

The two cats, black as midnight, sat watching the preacher, who read through the Gospels at top speed, aware of blazing yellow eyes watching him.

A third cat, big as a tiger, entered the room. It went to the fire full of red-hot coals and rolled among them, chewing them and spitting them out. Then it came to the other two cats facing the preacher in the chair.

“What shall we do with him?” it growled to the others.

“We should not do anything until Emmet comes,” the other cats replied together.

The preacher flipped to Revelation, looking furtively around the room. He closed the Bible and stood up.

“Goo’night cats. I is glad of yo’ company, but when Emmet comes, you done tell him I been heah and went.”

You can read a longer version of this story plus more ghostly folktales in Spooky South by S.E. Schlosser.