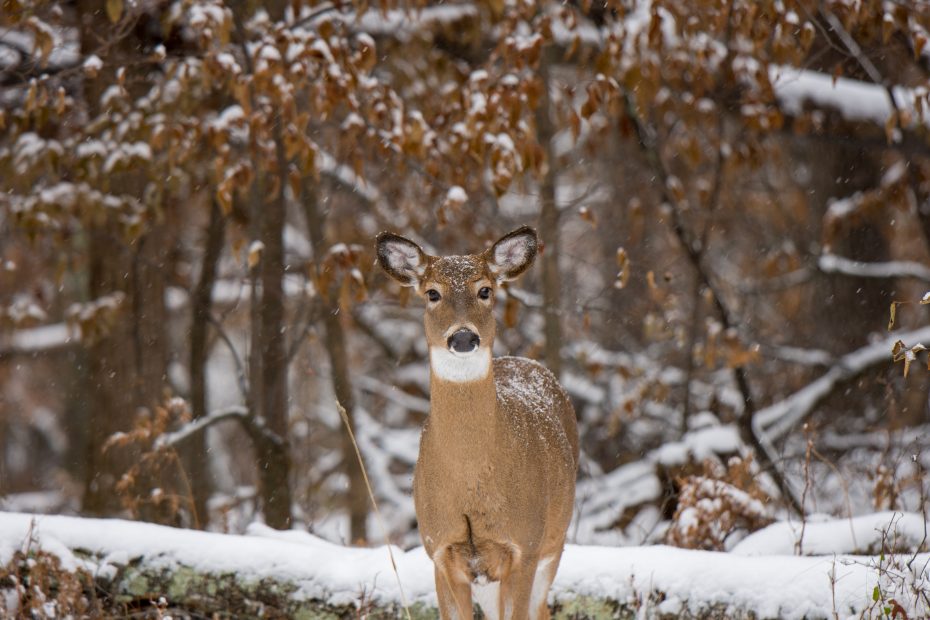 A tale of the Ojibwe/Chippewa

There lived a hunter in the north who had a wife and one child. His lodge stood far off in the forest, several days’ journey from any other. He spent his days in hunting, and his evenings in relating to his wife the incidents that had befallen him. As game was very abundant, he found no difficulty in killing as much as they wanted. Just in all his acts, he lived a peaceful and happy life.

One evening during the winter season, it chanced that he remained out later than usual, and his wife began to feel uneasy, for fear some accident had befallen him. It was already dark. She listened attentively, and at last heard the sound of approaching footsteps. Not doubting it was her husband, she went to the door and beheld two strange females. She bade them enter and invited them to remain.

She observed that they were total strangers in the country. There was something so peculiar in their looks, air, and manner, that she was uneasy in their company. They would not come near the fire; they sat in a remote part of the lodge, were shy and taciturn, and drew their garments about them in such a manner as nearly to hide their faces. So far as she could judge, they were pale, hollow-eyed, and long-visaged, very thin and emaciated. There was but little light in the lodge, as the fire was low, and served by its fitful flashes, rather to increase than dispel their fears.

“Merciful spirit!” cried a voice from the opposite part of the lodge, “there are two corpses clothed with garments.”

The hunter’s wife turned around, but seeing nobody, she concluded the sounds were but gusts of wind. She trembled and was ready to sink to the earth.

Her husband at this moment entered and dispelled her fears. He threw down the carcass of a large fat deer.

“Behold what a fine and fat animal,” cried the mysterious females, and they immediately ran and pulled off pieces of the choicest meat, which they ate with greediness. The hunter and his wife looked on with astonishment but remained silent. They supposed their guests might have been famished. Next day, however, the same unusual conduct was repeated. The strange females tore off the best portions and devoured it with eagerness. The third day the hunter thought he would anticipate their wants by tying up a portion of the best pieces for them, which he placed on the top of his load. They accepted it, but still appeared dissatisfied, and went to the wife’s portion and tore off more. The man and his wife felt surprised at such rude and unaccountable conduct, but they remained silent, for they respected their guests, and had observed that they had been attended with marked good luck during the residence of these mysterious visitors.

In other respects, the deportment of the females was strictly unexceptionable. They were modest, distant, and silent. They never uttered a word during the day. At night they would occupy themselves in procuring wood, which they carried to the lodge, and then returning the implements exactly to the places in which they had found them, resume their places without speaking. They were never known to stay out until daylight. They never laughed or jested.

The winter had nearly passed away, without anything uncommon happening, when, one evening, the hunter stayed out very late. The moment he entered and laid down his day’s hunt as usual before his wife, the two females began to tear off the best of the meat, in so unceremonious a way, that her anger was excited. She constrained herself, however, in a measure, but did not conceal her feelings, although she said but little. The guests observed the excited state of her mind and became unusually reserved and uneasy. The good hunter saw the change, and carefully inquired into the cause, but his wife denied having used any hard words. They retired to their couches, and he tried to compose himself to sleep, but could not, for the sobs and sighs of the two females were incessant. He arose on his couch and addressed them as follows: “What is it that gives you pain of mind and causes you to utter those sighs. Has my wife given you offence, or trespassed on the rights of hospitality?”

They replied in the negative. “We have been treated by you with kindness and affection. It is not for any slight we have received that we weep. Our mission is not to you only. We come from the land of the dead to test mankind, and to try the sincerity of the living. Often, we have heard the bereaved by death say that if the dead could be restored, they would devote their lives to make them happy. We have been moved by the bitter lamentations which have reached the place of the dead and have come to make proof of the sincerity of those who have lost friends. Three moons were allotted us by the Master of Life to make the trial. More than half the time had been successfully past, when the angry feelings of your wife indicated the irksomeness you felt at our presence and has made us resolve on our departure.”

They continued to talk to the hunter and his wife, gave them instructions as to a future life, and pronounced a blessing upon them.

“There is one point,” they added, “of which we wish to speak. You have thought our conduct very strange in rudely possessing ourselves of the choicest parts of your hunt. That was the point of trial selected to put you to. It is the wife’s peculiar privilege. For another to usurp it, we knew to be the severest trial of her, and consequently of your temper and feelings. We know your manners and customs, but we came to prove you, not by a compliance with them, but a violation of them. Pardon us. We are the agents of him who sent us. Peace to your dwelling, adieu!”

When they ceased, total darkness filled the lodge. No object could be seen. The inmates heard the door open and shut, but they never saw more of the two ghosts.

But the hunter found the success which they had promised. He became celebrated in the chase, and never wanted for anything. He had many children, all of whom grew up to adulthood, and health; peace, and long life were the rewards of his hospitality.