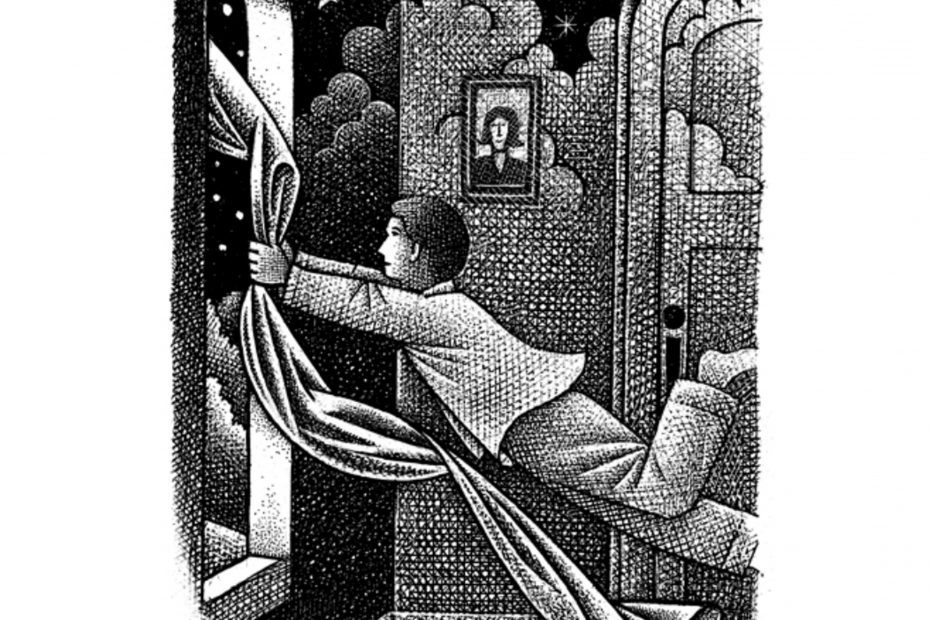 Now, my cousin P. S. Woodin is a successful businessman, and he’s got a pretty solid head on his shoulders. But when he told me that he owned a haunted house, I told him that he was plumb crazy. It was a nice, redbrick house about a half-mile above the bridge, and it sat right in front of an old Indian burial ground. Woodin had rented out the house more than once, but no one ever stayed there for long.

“I’m telling you, the tenants all claim the house is haunted,” Woodin told me. “I’m not making it up. I think maybe it has something to do with that old Indian burial ground in the back.”

“I think it has something to do with the quality of the people you rent the house to,” I snapped. “Honestly, Woodin, I might believe there were rats in the floorboards, or even squirrels in the attic. But ghosts?”

“Why don’t you stay there a few nights?” suggested Woodin. “Check the place out. I won’t charge you any rent.”

“Charge me rent?” I snapped. “You should pay me for dispelling the rumors. A haunted house!”

I packed a bag that very night and moved into the house. It was a large house and quite comfortable. I put my things away and spent a quiet evening reading a book before I went to bed. I fell asleep almost immediately and was dreaming happily about food when the covers were snatched right off my bed. I woke up at once, blinking blurrily in the darkened room.

“Good gravy, what a terrible draft!” I mumbled, sliding to the floor and picking up the covers. I staggered back to bed with my covers and went back to sleep. I had the top quilt clutched in my hand, the corner tucked under my chin. Suddenly, the quilt was ripped out of my grasp so fiercely that it yanked me halfway down the bed. I snapped awake again.

“You cut that out!” I shouted to the irritating draft. “Honestly, can’t a man get some sleep around here?” I fetched my covers, tucked them firmly in around me, and went back to sleep.

The next morning, I carefully examined my room, trying to find the annoying draft that had kept blowing my covers off the night before. The room was well constructed, and there didn’t seem to be any gaps around the windows or the door. Still, I decided I was overlooking something, since I knew for a fact that there was no such thing as a ghost.

I went to work that day and forgot all about my interrupted sleep as I immersed myself in the various tasks that crossed my desk. It wasn’t until I finished a late supper and went up to my room that I recalled the incident with the blankets.

“Ghosts! Balderdash and poppycock!” I growled, quoting some of the favorite Victorian sayings of the character in the book I was reading. I settled back against the pillows and read for an hour before turning off the light. As I made myself comfortable, the door to the room blew open with an eerie creak. For a moment I had the strange impression that someone had come into the room.

“What nonsense!” I said aloud, and turned over on my side. A moment later, the covers were snatched right off my body.

“Hey!” I shouted, sitting bolt upright. I jumped out of bed and grabbed the quilts from the floor. “I’m going to have to get that draft fixed in the morning,” I defiantly told the darkness, climbing back into my bed and tucking the covers firmly about me. I kept the top quilt clutched in both hands and lay waiting for the strange draft to strike again. Nothing happened.

“Nonsense,” I muttered, turning over and letting go of the top quilt. I was nearly asleep when the covers were whipped aside, leaving me completely bare. “I do not believe in ghosts!” I shouted, climbing out of bed and grabbing the quilts. I returned to the bed and slept with the covers firmly wrapped around my arms for the rest of the night.

I found it much harder to keep my attention on work the next day. My sleep had been restless, to say the least, since I kept expecting my blankets to be blown off by that strange draft.

That night, I went into the bedroom with a hammer and several nails and nailed the bedroom door shut. “I’d like to see a draft get through that!” I said, punctuating each word with a strike of my hammer. Was it my imagination, or did the air suddenly get chilly? I shivered. “Rubbish!” I exclaimed, trying to rid myself of the notion that I had angered something . . . or someone.

I felt certain that I would have an undisturbed sleep. Nothing was coming through that door tonight. I drifted off peacefully and was deep in dreamland when the bedroom door crashed open and the covers were snatched off my body so hard they left marks on my bare legs. “Cut that out!” I yelled, jumping to my feet and grabbing the covers from the floor. Immediately, the covers were yanked from my arms. I managed to grab the end of one of the blankets and pulled back, really angry now. Back and forth, back and forth the invisible presence and I wrestled, knocking into furniture, rolling right across the bed, neither of us giving an inch. Finally, I let go of the blanket so suddenly that it snapped backward and I heard a distinct “thump,” as if something . . . or someone . . . had fallen to the floor. “Get out!” I shouted at it. I must have won that round in our game of tug-of-war, because the door slammed shut with a rather sulky sound, like a spoiled child denied a toy. “Good night and good riddance,” I exclaimed, reclaiming my covers and climbing into bed.

I examined the door in the morning, and I couldn’t find a single nail left in place. I couldn’t even find the holes where I had driven the nails into the wood the night before. That creeped me out something awful, but “in for a penny, in for a pound” as the saying goes. I was committed to my course, and nothing was going to keep me from making that house habitable, ghost or no ghost.

For several nights in a row, I played tug-of-war with the unseen presence in the house. Sometimes, I lay on the bed and just pulled and pulled against the spirit that was trying to deprive me of my covers. Sometimes, we raged back and forth around the room like we did the night I nailed the door shut. I finally admitted defeat the night the spirit pulled me and the blankets right off the bed. It yanked the blankets straight toward the bedroom window with me sailing along behind them. I let out a yelp and let go of the blankets just as the window opened with a bang and the blankets sailed through. I hit the floor with a terrible thump that shook the floorboards.

I didn’t hear a sound, but there was a distinctly triumphant air about the room as I slowly got to my feet. “All right! You win,” I said in disgust. “I believe in ghosts. Do you hear me? I BELIEVE IN GHOSTS! Happy now?”

I felt the invisible presence saunter out of the room. It closed the door with a smug creak. I shook my fist at the door, then I turned on the light, packed my bag, and went home. The next morning, Woodin went to the redbrick house, retrieved the quilts from the front lawn, and had them washed, since I refused to go anywhere near that stupid house again.