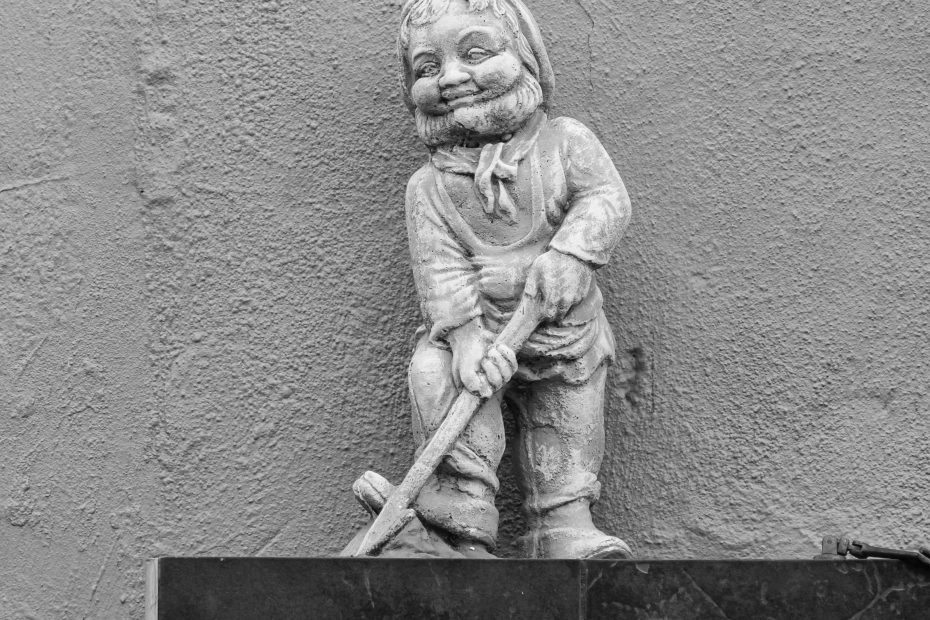 Tommy Knockers are the spirits of departed miners that help miners find ore. They also knock on the walls of the mines right before a cave-in. When you hear a Tommy Knocker knocking, it’s best to depart the area right quick. They have saved the life of many a miner who has been in a danger. Some folks say that the very first man to hear the sound is jinxed, but that is not always the case.

It’s important to stay on the good side of the Tommy Knockers. Many miners leave a bit of their lunch for the spirits, and to please them, they fashion the little clay figures of their spirits. The Tommy Knockers can be spiteful creatures if they don’t like you.

One unlucky miner named Eddie became a target of the Tommy Knockers. They drove him crazy, pelting him with stones, stealing his tools, blowing out his lantern. He couldn’t figure out why the Tommy Knockers had singled him out until one day he heard a voice calling to him from the dark opening of a nearby shaft. “Eddie, I want my five dollars!” the Tommy Knocker said.

Eddie was so startled he dropped his tools all over the ground. The voice sounded just like that of his old friend Joe who had died in a cave-in a few months back. Eddie had borrowed five dollars from Joe and had never returned it. Eddie went into the shaft, and sure enough there was Joe Trelawney’s ghost, shrunk to the size of a two-foot dwarf with a big ugly head, large ears and a crooked nose. He wore a peaked hat, a leather jacket, and water-soaked leather boots.

The Tommy Knocker was not pleased to see Eddie. “Give me back my five dollars, Eddie!” the ghost of his old friend demanded.

“I don’t have any money on me, Joe,” Eddie said, patting his pockets for emphasis.

“I’ve heard that before,” said the Tommy Knocker dryly. “I didn’t believe it then, and I don’t believe it now!” The Tommy Knocker disappeared into thin air, leaving an uneasy Eddie to wonder what the ghost would do next. He soon found out! All day long, Eddie was plagued by the Tommy Knocker. His ladder was shaken so hard that he almost fell. The loud tapping noise of an invisible drill nearly drove him mad. He just missed being buried by a rock fall. And through it all, Joe’s voice would taunt him: “Give me back my five dollars, Eddie!”

“All right, Joe, all right!” Eddie finally yelled into the mouth of the tunnel where his friend had appeared. “I’ll get your bloody five dollars!” Abandoning his work for the day, Eddie made the long climb to the surface and took five silver dollars from the moneybox he kept under a loose board in his bedroom. The he climbed back down into the mine and stuck the five dollars into a crack in the wall next to the place Joe’s spirit had appeared to him.

“It’s about bloody time,” Joe said, appearing next to him and peering critically into the crack where the money lay.

“Are you going to leave me alone now?” Eddie asked.

The Tommy Knocker grinned impishly at Eddie. “Maybe,” he said. He scooped up the five silver dollars and disappeared into the dark.