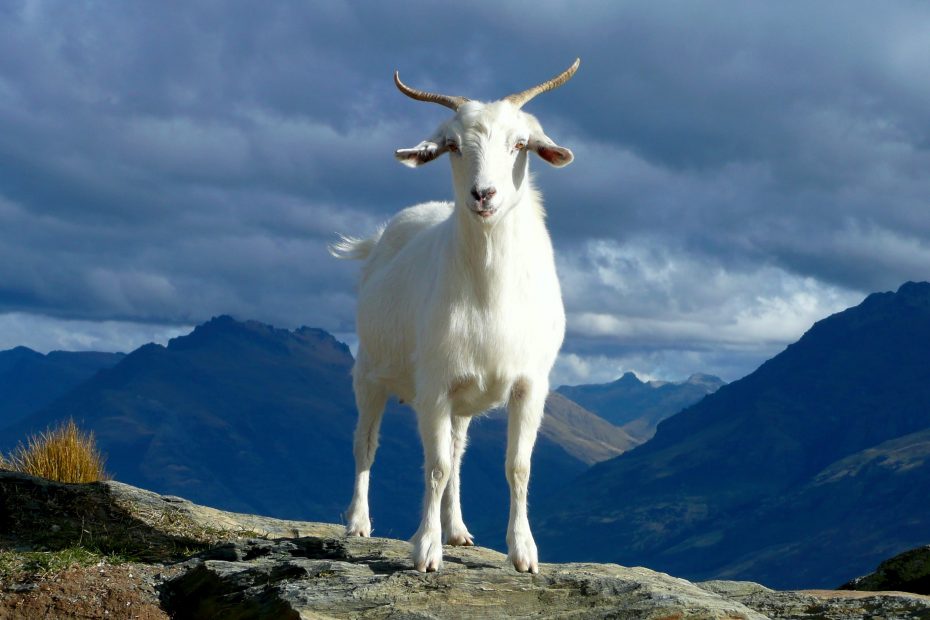 Snippity-snip, snap and swill,
The tale begins upon a hill…

The air was crisp and cool. The sky was an endless blue. The green meadow grass swayed in a gentle breeze. And Big Billy Goat Gruff was bored.

“I am tired of eating in the same old field every day,” he told his brothers. “I want to eat in the meadow on the far side of the stream.

“Ohhh no, Big Billy Goat,” said little brother. “We cannot walk through the stream for it is too deep and too fast. We would be swept away!”

“And we cannot walk over the bridge,” said middle brother, “because there is a big troll under the bridge who will gobble us up if we try to cross it.”

“I am not afraid of the troll,” said Big Billy Goat Gruff, tossing his bold head with the huge round horns. He stamped the ground – once, twice, thrice – with his big hooves. “Let him try to eat me! We shall see who wins the fight!”

“Not so!” cried Big Billy Goat Gruff, dancing around the meadow excitedly, his large hooves making holes in the mossy turf under his feet. “I have a plan!”

The three billy goats put their heads together and whispered for a long time. Finally they broke the huddle and all three of them trotted across the wide meadow to the narrow bridge that crossed the fast-flowing, deep stream in the ravine dividing their meadow and the one on the other side.

Taking a deep breath for courage, Little Billy Goat Gruff stepped onto the rough wooden bridge. Trip-trap, trip-trap. His little hooves made the bridge spring up and down a little as he moved carefully forward.

“It’s just me,” said Little Billy Goat Gruff in a very small voice. “I am the teeny-tiniest Billy Goat Gruff, all skin and bones, going over to the meadow to make myself fat.”

A second huge hand joined the first on the rail. “I am coming to eat you,” said the troll, his voice rumbling so deep that it shook the whole bridge.

“Eat me?” asked Little Billy Goat Gruff, shaking from head to toe, “I am too little. Not even worth a bite for a big troll like you. You should wait for my middle brother to come. He is much bigger than me.”

This made sense to the troll. Why go to all that bother for one small bite of Billy Goat when a bigger Billy Goat was on its way?

“Gerroff my bridge then,” the troll roared, slipping back down into the darkness underneath. “And don’t come back here until you are big and fat!”

“Yes sir,” said Little Billy Goat Gruff, trotting off the far side of the bridge in triumph and heading up into the wide-green meadow above. The plan was working!

When Little Billy Goat Gruff reached the top of the hill, Middle Billy Goat Gruff stepped onto the rough wooden bridge. Trap-rap, trap-rap. His medium-sized hooves made the boards of the bridge spring and sway under his weight as he moved forward.

Two blazing troll eyes over a long, twisted nose glared at him through the rails of the bridge. “I am coming to eat you,” said the troll, his voice rumbling so deep that it shook the whole bridge.

“Eat me?” asked Middle Billy Goat Gruff with a laugh. “Why do you want to eat me? I am all skinny from the winter. Barely two bites for a big troll like you. And my bones will get stuck in your throat and make it feel all scratchy and horrible. You should wait for my big brother to come. He is huge! Much bigger than me.”

This made good sense to the troll. Why go to all that bother for one bony, medium sized Billy Goat when a bigger Billy Goat was on its way?

“Gerroff my bridge then,” the troll roared, slipping back down into the darkness underneath. “And don’t come back here until you are big and fat!”

As they watched, Big Billy Goat Gruff stepped onto the rough wooden bridge. Stomp-tromp, stomp-tromp. His huge hooves made the boards bend and give protesting creaks under his massive weight as he moved forward.

A pair of huge round eyes peered out from the darkness under the bridge. “Who’s that stomp-tromping over my bridge?” roared the troll. He sprang out onto the top of the bridge in a single leap. Big Billy Goat Gruff narrowed his eyes at the large, hairy troll. “It’s me,” he said, lowering his huge head so the curved horns were pointed at the troll. Then he charged.

Wham! Big Billy Goat Gruff slammed into the troll. “Arrrgh!” screamed the troll as it was lifted clean off its feet and thrown way, way, way up into the air. The troll landed head down on the bridge, making it shake and rattle from top to bottom. Big Billy Goat Gruff stomped and tromped on the troll with his huge hooves until the troll was smashed flat on the wood boards. Then he tossed him into the raging stream with his huge horns and the troll sailed down the ravine and out of sight, never to be seen again in those parts.

And Big Billy Goat Gruff went up the hill to join his brothers in the meadow. All summer long they ate the lovely green grass in both meadows until they all grew quite fat. And they walked back and forth over the troll-free bridge whenever they wanted.

Snippity-snip, snap and snout,
This little tale has been told out!

previousThe Fisherman and the Bear
nextWhat are some American Folksongs?