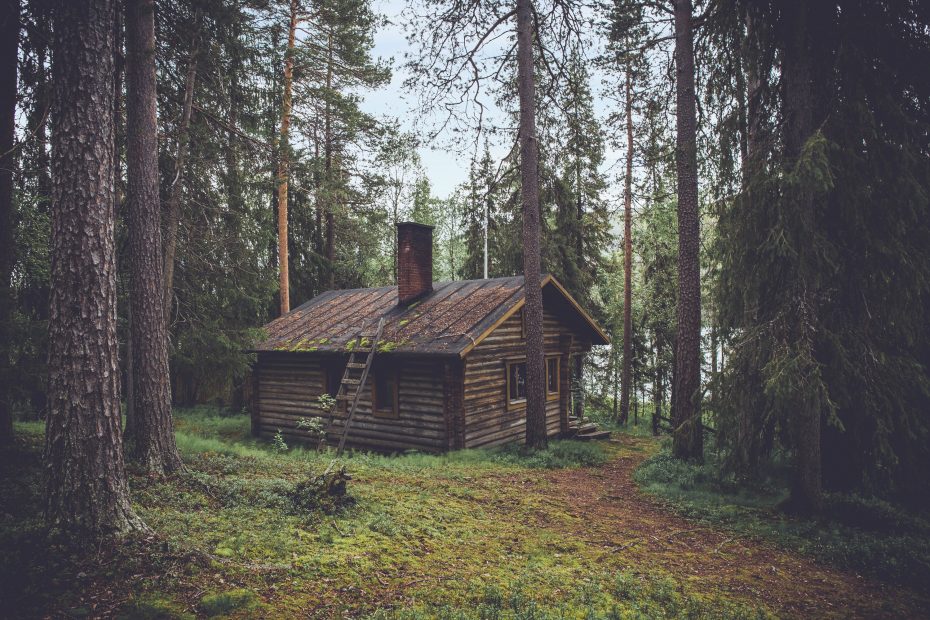 About a mile back from the river stood the cabin of Nick Wolsey, who, in the 1800s, was known to the river settlements as a hunter and trapper of correct aim, shrewdness, endurance, and taciturn habit. For many years he lived in this cabin alone, except for the company of his dog; but while visiting a small settlement in the wilderness he was struck with the engaging manner of one of the girls. He repeated the visit; and thereafter he found cause to go to the settlement frequently. At length won the maid’s consent to be his wife.

The simple marriage ceremony was performed, but the wedding was interrupted in an almost tragic manner, for a surly fellow who had loved the girl, yet who never had found courage to declare himself, was wrought to such a jealous fury at the discovery of Wolsey’s good fortune that he sprang at him with a knife, and would have dispatched him on the spot had not the man’s faithful hound leaped at his throat and borne him to the ground. Wolsey disarmed the fellow and kicked and cuffed him to the edge of the wood, while the whole company shouted with laughter at this ignominious punishment and approved it.

A year or more passed. Wolsey and his wife were happy in their free and simple life; happy, too, in their little babe. Wolsey was seldom absent from his cabin for any considerable length of time, and usually returned to it before the night set in. One evening he noticed that the grass and twigs were bent near his house by some passing foot that, with the keen eye of the woodman, he saw was not his wife’s. “Some hunter,” he said, “saw the house when he passed here, and stopped to look in.” For the trail led to his window and diverged thence to the forest again.

A few days later, as Wolsey was returning, he came on the footprints that were freshly made, and a shadow crossed his face. On nearing the door, he stumbled on the body of his dog, lying rigid on the ground.

“How did this happen, Minamee?” he cried, as he flung open the door.

The wife answered, in a low voice, “O Hush! you’ll wake the child.”

Nick Wolsey entered the cabin and stood as one turned to marble. Minamee, his wife, sat on the gold hearth, her face and hands cut and blackened, her dress torn, her eyes glassy, a meaningless smile on her lips. In her arms she pressed the body of her infant, its dress soaked with blood, and the head of the little creature lay on the floor beside her. She crooned softly over the cold clay as if hushing it to sleep, and when Wolsey at length found words, she only whispered, “Hush! you will wake him.”

The night went heavily on; day dawned, and the crooning became lower and lower; still, through all that day the bereft woman rocked to and fro upon the floor, and the agonized husband hung about her, trying in vain to give comfort, to bind her wounds, to get some explanation of the mystery that confronted him.

The second night set in, and it was evident that it would be the last for Minamee. Her strength failed until she allowed herself to be placed on a couch of skins, while the body of her child was gently lifted from her arms. Then, for a few brief minutes, her reason was restored, and she found words to tell her husband how the man whose murderous attack he had thwarted at the wedding had come to the cabin, shot the dog that had rushed out to defend the place, beat the woman back from the door, tore the baby from its bed, slashed its head off with a knife, and, flinging the little body into her lap, departed with the words, “This is my revenge. I am satisfied.”

Before the sun was in the east again, Minamee died in her husband’s arms.

Wolsey sat for hours in the ruin of his happiness, his breathing alone proving that he was alive, and when at last he arose and went out of the house, there were neither tears nor outcry; he saddled his horse, took up the carefully wrapped body of his wife, and rode off to the westward. At nightfall he came to the settlement where he had won his bride, and relating to the assembled settlers what had happened, he demanded that the murderer be given up to him. His demand was readily granted, whereupon the settlers advanced on the cowering wretch and with the quick fling and jerk of a raw-hide rope bound his arms to his side. Then they tied the body of Minamee to her killer and flung the two – one living, one dead – onto the back of a horse, securing them there with so many turns of rope that nothing could displace them. With a shout, the settlers sent the animal plunging, foaming and snorting, into the wilderness. When it had vanished and the hoof-beats were no longer heard, Nick Wolsey took his rifle on his arm and left the settlement forever.

Tradition says that the horse never stopped in its mad gallop, but that on still nights it can be heard sweeping through the woods along the river like a whirlwind, and that as the sound goes by a smothered voice breaks out in cursing, in appeal, then in harsh and dreadful laughter.