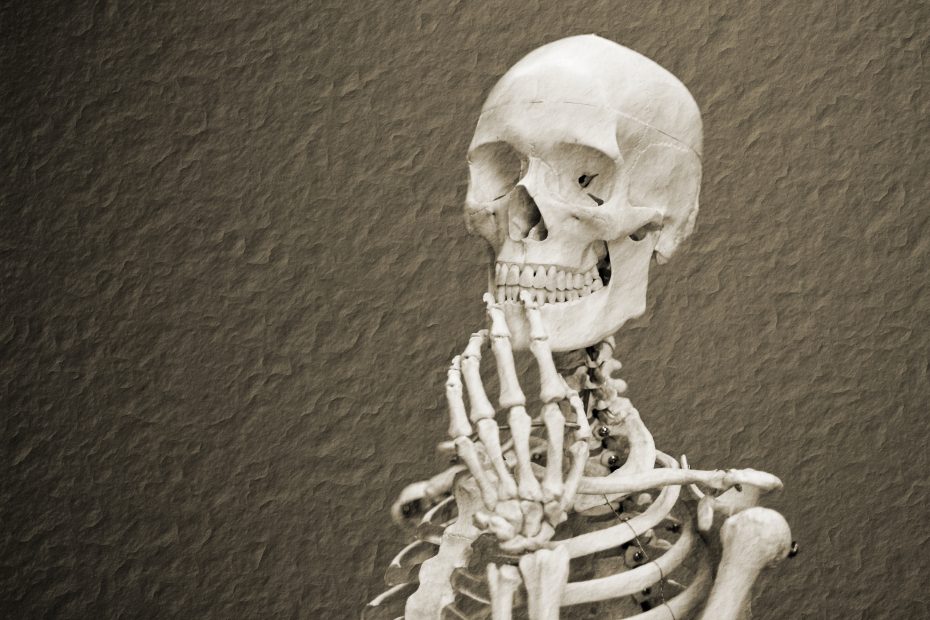 The boy had been out looking for work all day with no luck. When night fell, he was far from home. He decided to spend the night in an empty, rundown house. The minute he laid down he fell into a sound sleep. The boy was awakened quite suddenly by a thump on the roof. With a pounding heart, he sat up and lit a candle. A voice called out, “I’m falling down!”

The boy scrambled out of the way just as a skeletal arm came crashing to the floor. The voice shouted again, “I’m falling down!” and another arm landed beside the first. Then a leg, the chest, and a second leg. Before he could count to ten, a complete skeleton was standing in front of him, grinning madly.

The boy lifted his chin and grinned back, determined not to show his fear.  The skeleton was delighted by the boy’s spirit and said, “You have courage, son. Are you brave enough to wrestle me?”

The boy was terrified, but he did not dare refuse this strange apparition. The skeleton and the boy wrestled back and forth, up and down the room.  Remembering a trick his older brother had taught him, he twisted suddenly and threw the skeleton onto the ground.

“You’ve won!” The skeleton said, “Such courage deserves a reward. Come, I will give you my treasure.”

The boy was startled. What kind of treasure could an old skeleton have?

The boy dropped the skeleton onto the floor. “I will break all your bones!” he said. Impressed, the skeleton said: “You are so courageous and strong, I will let you see my treasure.”

The boy lit the candle and turned to look into the room. It was filled with piles and piles of gold and silver and jewels.

“I want you to promise me something,” The skeleton said.

The boy drew his gaze reluctantly from the magnificent treasure and looked at the skeleton. “I want you to promise me that you will gather all the poor people you can find in one day and give them each a bag of money. The rest you can keep for yourself.”

It would be a good thing to share this wealth with the needy, the boy decided, so he agreed to do what the skeleton had asked.

The skeleton gave a happy laugh and began to disappear, piece by piece. First his head, then his leg, then his chest, then his other leg and so on, until he was gone.

The boy did just as he had promised, and when he had finished his task, he took the rest of the treasure back to his family. They lived in comfort all of their days.