The Origin of Corn 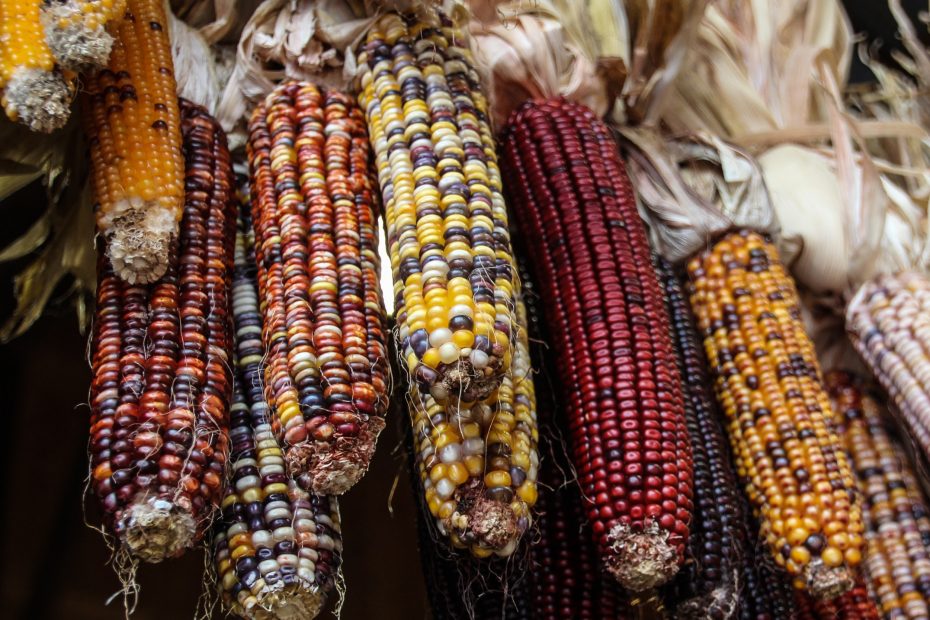 A Myth of the Ojibwe/Chippewa Nation

In times past, a poor man was living with his wife and children in a beautiful part of the country. He was not only poor, but inexpert in procuring food for his family, and his children were all too young to give him assistance. Although poor, he was a man of a kind and contented disposition. He was always thankful to the Great Spirit for everything he received. The same disposition was inherited by his eldest son, who had now arrived at the proper age to undertake the ceremony of the Ke-ig-uish-im-o-win, or fast, to see what kind of a spirit would guide him through life. Wunzh, for this was his name, had been an obedient boy from his infancy, and was of a pensive, thoughtful, and mild disposition, so that he was beloved by the whole family.

As soon as the first indications of spring appeared, the family built Wunzh the customary little lodge at a retired spot, some distance from their own, where he would not be disturbed during this solemn rite. In the meantime, he prepared himself, and immediately went into it, and commenced his fast. The first few days, he amused himself, in the mornings, by walking in the woods and over the mountains, examining the early plants and flowers, and in this way prepared himself to enjoy his sleep, and, at the same time, stored his mind with pleasant ideas for his dreams. While he rambled through the woods, he felt a strong desire to know how the plants, herbs, and berries grew, without any aid from man, and why it was that some species were good to eat, and others possessed medicinal or poisonous juices. He recalled these thoughts to mind after he became too languid to walk about and had confined himself strictly to the lodge; he wished he could dream of something that would prove a benefit to his father and family, and to all others. “True!” he thought, “the Great Spirit made all things, and it is to him that we owe our lives. But could he not make it easier for us to get our food, than by hunting animals and taking fish? I must try to find out this in my visions.”

On the third day he became weak and faint, and kept his bed. He fancied, while thus lying, that he saw a handsome young man coming down from the sky and advancing towards him. He was richly and gayly dressed, having on a great many garments of green and yellow colors, but differing in their deeper or lighter shades. He had a plume of waving feathers on his head, and all his motions were graceful.

“I am sent to you, my friend,” said the celestial visitor, “by that Great Spirit who made all things in the sky and on the earth. He has seen and knows your motives in fasting. He sees that it is from a kind and benevolent wish to do good to your people, and to procure a benefit for them, and that you do not seek for strength in war or the praise of warriors. I am sent to instruct you, and show you how you can do your kindred good.”

He then told the young man to arise, and prepare to wrestle with him, as it was only by this means that he could hope to succeed in his wishes. Wunzh knew he was weak from fasting, but he felt his courage rising in his heart, and immediately got up, determined to die rather than fail. He commenced the trial, and after a protracted effort, was almost exhausted, when the beautiful stranger said, “My friend, it is enough for once; I will come again to try you;” and, smiling on him, he ascended in the air in the same direction from which he came.

The next day the celestial visitor reappeared at the same hour and renewed the trial. Wunzh felt that his strength was even less than the day before, but the courage of his mind seemed to increase in proportion as his body became weaker. Seeing this, the stranger again spoke to him in the same words he used before, adding, “Tomorrow will be your last trial. Be strong, my friend, for this is the only way you can overcome me and obtain the boon you seek.”

On the third day he again appeared at the same time and renewed the struggle. The poor youth was very faint in body, but grew stronger in mind at every contest, and was determined to prevail or perish in the attempt. He exerted his utmost powers, and after the contest had been continued the usual time, the stranger ceased his efforts and declared himself conquered. For the first time he entered the lodge, and sitting down beside the youth, he began to deliver his instructions to him, telling him in what manner he should proceed to take advantage of his victory.

“You have won your desires of the Great Spirit,” said the stranger. “You have wrestled manfully. To-morrow will be the seventh day of your fasting. Your father will give you food to strengthen you, and as it is the last day of trial, you will prevail. I know this, and now tell you what you must do to benefit your family and your tribe. To-morrow,” he repeated, “I shall meet you and wrestle with you for the last time; and, as soon as you have prevailed against me, you will strip off my garments and throw me down, clean the earth of roots and weeds, make it soft, and bury me in the spot. When you have done this, leave my body in the earth, and do not disturb it, but come occasionally to visit the place, to see whether I have come to life, and be careful never to let the grass or weeds grow on my grave. Once a month cover me with fresh earth. If you follow my instructions, you will accomplish your object of doing good to your fellow-creatures by teaching them the knowledge I now teach you.” He then shook him by the hand and disappeared.

In the morning the youth’s father came with some slight refreshments, saying, “My son, you have fasted long enough. If the Great Spirit will favor you, he will do it now. It is seven days since you have tasted food, and you must not sacrifice your life. The Master of Life does not require that.”

“My father,” replied the youth, “wait till the sun goes down. I have a particular reason for extending my fast to that hour.”

“Very well,” said the old man, “I shall wait till the hour arrives, and you feel inclined to eat.”

At the usual hour of the day the sky-visitor returned, and the trial of strength was renewed. Although the youth had not availed himself of his father’s offer of food, he felt that new strength had been given to him, and that exertion had renewed his strength and fortified his courage. He grasped his angelic antagonist with supernatural strength, threw him down, took from him his beautiful garments and plume, and finding him dead, immediately buried him on the spot, taking all the precautions he had been told of, and being very confident, at the same time, that his friend would again come to life. He then returned to his father’s lodge, and partook sparingly of the meal that had been prepared for him. But he never for a moment forgot the grave of his friend. He carefully visited it throughout the spring, and weeded out the grass, and kept the ground in a soft and pliant state. Very soon he saw the tops of the green plumes coming through the ground; and the more careful he was to obey his instructions in keeping the ground in order, the faster they grew. He was, however, careful to conceal the exploit from his father.

Days and weeks passed in this way. The summer was now drawing towards a close, when one day, after a long absence in hunting, Wunzh invited his father to follow him to the quiet and lonesome spot of his former fast. The lodge had been removed, and the weeds kept from growing on the circle where it stood, but in its place stood a tall and graceful plant, with bright-colored silken hair, surmounted with nodding plumes and stately leaves, and golden clusters on each side. “It is my friend,” shouted the lad; “it is the friend of all mankind. It is corn. We need no longer rely on hunting alone; for, as long as this gift is cherished and taken care of, the ground itself will give us a living.” He then pulled an ear. “See, my father,” said he, “this is what I fasted for. The great Spirit has listened to my voice, and sent us something new, and henceforth our people will not alone depend upon the chase or upon the waters.”

He then communicated to his father the instructions given him by the stranger. He told him that the broad husks must be torn away, as he had pulled off the garments in his wrestling; and having done this, directed him how the ear must be held before the fire till the outer skin became brown, while all the milk was retained in the grain. The whole family then united in a feast on the newly grown ears, expressing gratitude to the Merciful Spirit who gave it. And so, corn came into the world.