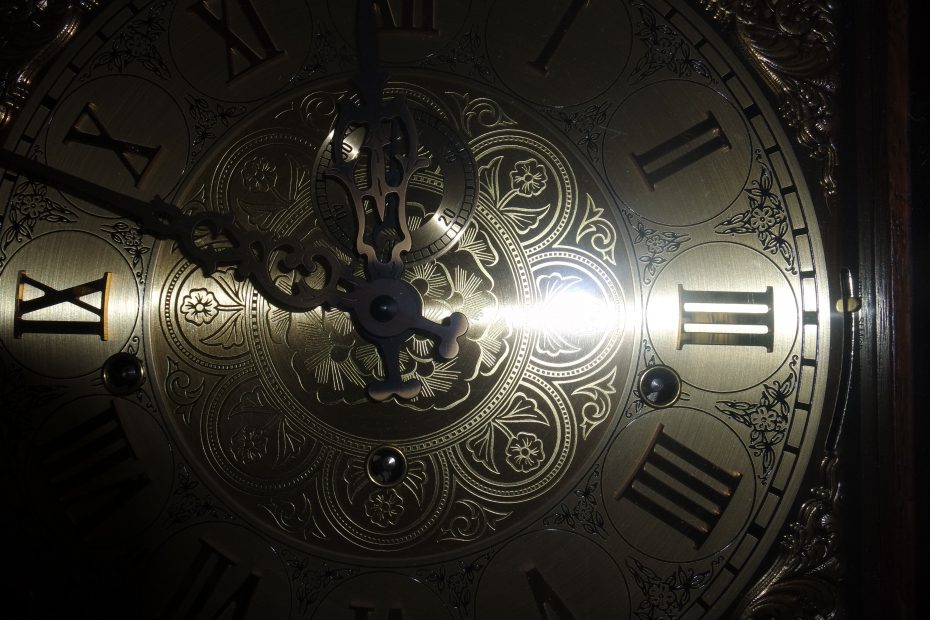 She lived alone in a rickety house in White Plains, and the only thing of value she possessed was a tall clock, such as relic hunters prize, that ticked solemnly in a landing on the stairs. The neighbors avoided her, for she was eccentric and not fond of company. But Polly was not always a recluse. The old clock, if it could speak, had a sad tale to tell of its owner. A tale of love…and despair.

During the Revolution, the house stood within the British lines, and as Polly’s father was a colonel in Washington’s army, she was left almost alone in it. The British officers respected her place, but they had an unpleasant way of running in unannounced and demanding entertainment, in the king’s name, which she felt forced to grant.

One rainy afternoon the door was flung open, then locked on the inside, and she found herself in the arms of a stalwart, handsome lieutenant, who wore the blue. It was her betrothed. Their glad talk had not been going long when there came a rousing summons at the door. Three English officers were awaiting admittance.

Perhaps they had seen Lawrence Carter go into the house, and if caught he would be killed as a spy. He must be hidden, but in some place where they would not think of looking. The clock! That was the place. With a laugh and a kiss, the young man submitted to be shut in this narrow quarter and throwing his coat and hat behind some furniture the girl admitted the officers, who were wet and surly and demanded dinner. They tramped about the best room in their muddy boots, talking loudly, and in order to break the effect of the chill weather they passed the brandy bottle freely. Polly served them with a dinner as quickly as possible, for she wanted to get them out of the house, but they were in no mood to go, and the bottle passed so often that before the dinner was over, they were noisy and tipsy and were using language that drove Polly from the room.

At last, to her relief, she heard them preparing to leave the house, but as they were about to go the senior officer, looking up at the landing, now dim in the paling light, said to one of the others, “See what time it is.” The officer addressed, who happened to be the drunkest of the party, staggered up the stair and exclaimed, “The d—-d thing’s stopped.” Then, as if he thought it a good joke, he added, “It’ll never go again.” Drawing his saber, he gave the clock a careless cut and ran the blade through the panel of the door; after this the three passed out.

When their voices had died in distant brawling, Polly ran to release her lover. Something thick and dark was creeping from beneath the clock-case. With trembling fingers, she pulled open the door, and Lawrence, her lover, fell heavily forward into her arms. He was dead.