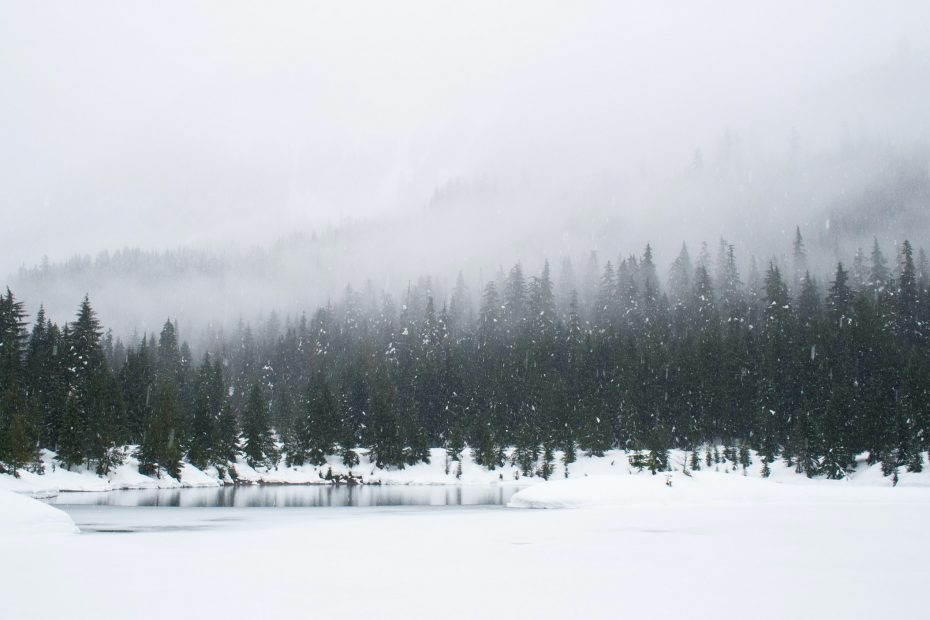 A Legend of the Passamaquoddy

Once upon a time there was a village built on the bank of a wide river. During the spring, summer, and autumn the people were very happy. There was plenty of fuel and game in the deep woods; the river afforded excellent fish. But the Passamaquoddy dreaded the months when the Ice King reigned.

One winter the weather was terribly cold, and the people suffered severely. The Ice King called forth the keen wind from the northern sky and piled the snowdrifts so high in the forests that it was most difficult to supply the wigwams with game. He covered the river with ice so thick that the people feared it would never melt.

“When will the Ice King leave us?” they asked each other. “We shall all perish if he continues his cruel reign.”

At last signs of spring encouraged the stricken people. The great snowdrifts in the forests disappeared and the ice on the river broke into large pieces. All of these floated downstream except one huge cake which lodged on the bank very near the village. And when the people saw that the spring sunshine did not melt this great mass of ice they were puzzled and anxious.

“It is the roof of the Ice King’s lodge,” they said. “We shall never enjoy warm weather while he dwells near us. Have we no brave who is willing to do battle with this winter tyrant?”

At last, a courageous young hunter armed himself with a huge club and went forth to see if he could shatter the glittering frozen mass and rid the village of the giant who dwelt beneath it. With all his strength he struck the ice roof blow upon blow, crying out, “Begone, O cruel Ice King! Your time is past! Begone!”

Finally, there was a deafening noise like the crashing of forest trees when the lightning strikes, and the huge ice cake split into several pieces.

“Begone!” cried the young hunter, as he struggled with each great lump of ice until he pushed it from the bank and tumbled it into the river below.

And when the mighty task was finished the white figure of the Ice King stood before the young hunter.

“You have ruined my lodge,” said the giant.

“The winter season is past,” answered the brave. “Begone!”

“After several moons I shall return to stay,” threatened the Ice King. Then he stalked away toward the North.

The people were very happy when they knew that the young hunter had conquered the giant; but their joy was somewhat dampened when they heard about the threatened return of the Ice King.

“I shall prepare for his return and do battle with him again,” declared the conqueror.

This promise comforted the people somewhat, but still they thought of the coming winter with dread.

During the autumn the young hunter built near the river a strong wigwam and stored therein abundant fuel and dried game. He filled many bags made of skin, with oil, which he procured from the animals he killed. Also, he was well supplied with fur rugs, blankets, and warm clothes.

“The Ice King has come,” said the people. “If he keeps his threat to stay among us, we shall surely perish.”

One bitter cold day the young hunter who had prepared well for the severe weather sat in his wigwam near a blazing fire. Suddenly, a strong gust of wind tore aside the bear skin which protected the doorway and into the lodge stalked the Ice King. His freezing breath filled the place and dampened the fire. He took a seat opposite the young hunter, who said, “Welcome, Ice King.”

The young hunter shivered with cold at the sudden change of temperature in his wigwam, but he rose and brought more logs to the fire. Also, he opened one of his bags of oil and poured the contents on the great pieces of wood. The flames soon caught the oil-soaked logs and a roaring fire crackled and blazed in the wigwam. More and more fuel the young hunter piled on his fire until finally the frosty cold air was changed to summer heat.

The Ice King shifted his seat away from the glowing fire. Farther and farther away he pushed until he sat with his back against the wall of the wigwam. As he moved, he seemed to grow smaller and weaker. The icy feathers of his headgear drooped about his forehead and great drops of sweat covered his face. But still the young hunter piled fuel on the blazing fire.

But to the words of the giant the young hunter was deaf. He opened another bag of oil and poured it on the logs.

“Have mercy, I beg you!” pleaded the Ice King. He rose and staggered toward the door.

“You have conquered me,” he said in a weak voice. “I will depart. Twice you have won a victory over me. I give up my hope of reigning continually among your people. My season shall last during three moons, only.”

He staggered out of the wigwam and stalked wearily away. Since that day the giant Ice King has not tried to reign throughout the year.

Citation: Skinner, Ada M. and Skinner, Eleanor L. The Pearl Story Book. New York: Duffield & Company, 1919. Edited by S.E. Schlosser. This story is in the public domain and is part of the cited work.