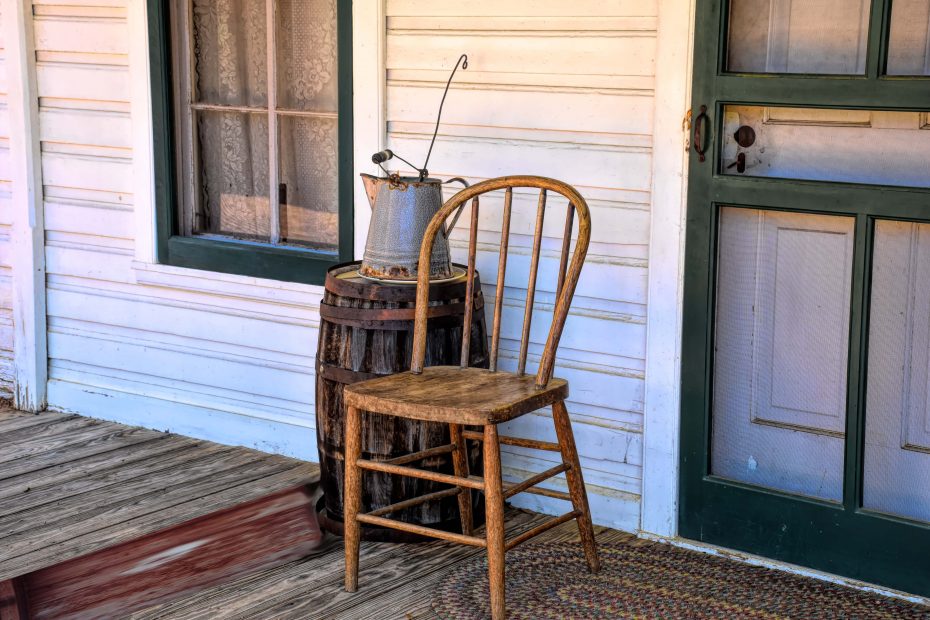 The Phelps place was an old, abandoned property with a monstrous, decrepit Victorian house that was supposed to be haunted. It should have been a good resting place for the local deer hunters, but they would not go near it. A few that tried came away before midnight with tales of ghostly thumping noises, gasps, moans, and a terrible wet bloodstain that appeared on the floor of the front porch and could not be wiped away.

Phelps was an Englishman who had purchased land some 20 miles off the Mendocino coast in the 1880s. He had built a huge, fancy Victorian house all covered with gingerbread trimmings and surrounded by lovely gardens. When everything was arranged to his liking, he sent out party invitations to everyone within messenger range. It was the biggest social event of the year, with music and dancing and huge amounts of food. Sawhorse tables were set up with refreshments, and drinks were set out on the front porch. People came from miles around. The only one missing was old man McInturf’s son-in-law. They had had a terrible fight that afternoon, and the boy had stalked off in a rage, threatening to get even with the old man.

Around midnight, the musicians took a recess and old man McInturf went out on the front porch with some friends. Suddenly there came the thunder of hooves rushing up the lane. A cloaked figure rode towards the lantern-lit porch. McInturf put down his drink. “That will be my son-in-law,” he told his friends as he went down the steps. The cloaked figure stopped his horse just outside the pool of lantern-light. There was a sharp movement and two loud shots from a gun. Old man McInturf staggered backwards, shot in the throat and the chest. The cloaked man wheeled his horse and fled down the lane as friends ran to the assistance of the old man.

They laid McInturf down on the porch. He was bleeding heavily and they were afraid to move him much. There was some talk of fetching the doctor, but everyone knew it was too late. So much blood was pouring from the old man’s wounds that it formed a pool underneath his head. McInturf coughed, once, twice; a hideous, gurgling, strangling sound that wrenched at the hearts of all who heard it. Then he died.

McInturf’s body was laid out on the sofa, and the once-merry guests left in stricken silence. The servants came and wiped the red-brown bloodstain off the floorboards. The next day, a wagon was brought to the front of the house and McInturf’s body was carried out onto the porch. As the men stepped across the place where McInturf had died, blood began to pool around their boots, forming a wet stain in exactly the pattern that had been wiped up by the servants the night before. The men gasped in fear. One of them staggered and almost dropped the body. They hurriedly laid McInturf in the back of the wagon, and a pale Phelps ordered the servants to clean up the fresh bloodstain.

From that day forward, the Phelps could not keep that part of the porch clean. Every few weeks, the damp bloodstain would reappear. They tried repainting the porch a few times, but the bloodstain would always leak through. In the county jail, McInturf’s son-in-law died of a blood clot in the brain. A few months later, one of the Phelps servants went mad after seeing a “terrible sight” that made his head feel like it was going to exploded. Folks started saying the house was being haunted by the ghost of McInturf, seeking revenge. The property was resold several times, but each resident was driven out by the terrible, gasping ghost of McInturf reliving his last moments and by the bloodstain that could not be removed from the porch. The house was eventually abandoned.

A cowboy has a much-too-close encounter with the ghost of Old Man McInturf in Spooky California by S.E. Schlosser.