Swept Over: Ghosts of the Lower Falls 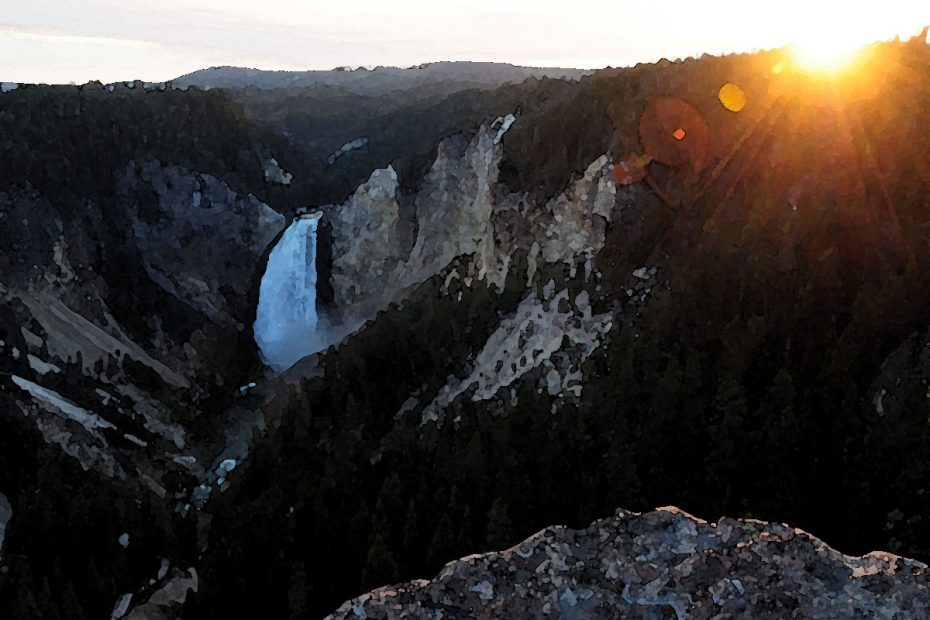 Today the water drums of the Lower Falls in Yellowstone National Park beat strongly, just as they did back in 1870 when the story which became a legend first took place.  In those days, a group of five militia men and their Crow guide who decided to explore the little known Canyon of the Yellowstone.  The explorers penetrate deep into the canyon region, keeping an eye out for signs of gold while they explored.

On the morning of April 2, the expedition paused in the foothills to sink a hole into a likely spot, having seen promising signs of ore. When their Crow guide told them there was a small band of Native Americans he identified as Sheep Eaters were camped four miles upstream, they were not unduly distressed. They had plenty of advanced weaponry among them, enough to take on a small native band if it decided to attack.

That night, the Native American tribesmen ran off with the explorer’s pack horses. When the theft was discovered at daylight, the white men pursued the thieves into the precipitous mountains. The tribesmen had a four-hour head start on the explorers, but the white men were fewer in number and gained rapidly on their quarry.

After three hours of hard riding, the explorers came suddenly upon the tribe. They were crossing the river just above the Lower Falls aboard a hastily constructed raft of driftwood held together with thongs made of buckskin and buffalo robes. A circle of men sat with their weapons at the center of the unwieldy raft while the women paddled desperately for the opposite shore with wide pieces of bark. The stolen pack horses were swimming beside the raft, which was swept precariously downstream in spite of the rowers’ best efforts.

The watching explorers realized that the river current was too strong for the unwieldy craft. The paddlers were fighting a losing battle to reach the opposite bank. The horses had a better chance of success. Four of them were already climbing the bank on the far shore. Beside the explorers, the Crow guide calmly raised his rifle and fired at the retreating band. One of the braves gave a yell of pain, and an explorer cried, “For God’s sake, boys, don’t murder them—they are bound to go over the falls!”

At that moment, the raft was caught in an eddy and sank an inch or two below the surface so that the men and women aboard her appeared to be sitting on top of the river like water spirits or the ancient gods. It was an eerie sight. The spell was broken when a brave fired an arrow through the arm of the Crow guide. With an angry yelp, the Crow guide fired again into their midst, wounding a second warrior. The explorers had to tie up their guide to prevent him from shooting more members of the doomed band.

The raft moved swiftly toward the edge, carrying the wailing women and the unmoving braves, who began chanting a soft death-song. The warriors gazed calmly toward the lip of the falls, where the water disappeared so abruptly with a roar like thunder. Their courage in the face of sure death silenced the watching explorers. One by one, the white men raised their hats in salute to the brave warriors below as the raft, still intact, sailed out over the lip of the falls and disappeared into the roaring white foam with its human cargo.

In that heart-wrenching moment, two large eagles flew over the roaring mouth of the precipice, screaming their defiance as the water thundered like drums on the jagged rocks far below. It was a fitting tribute to the bravery of the dead tribesmen below. With many backward glances, the white explorers turned their horses away from the river and rode away.

To this day, people who stand on the platform at the brink of the Lower Falls of Yellowstone sometimes hear the voices of the chanting warriors singing their death song.  And the river water sometimes flows with a red tinge, like that of blood.