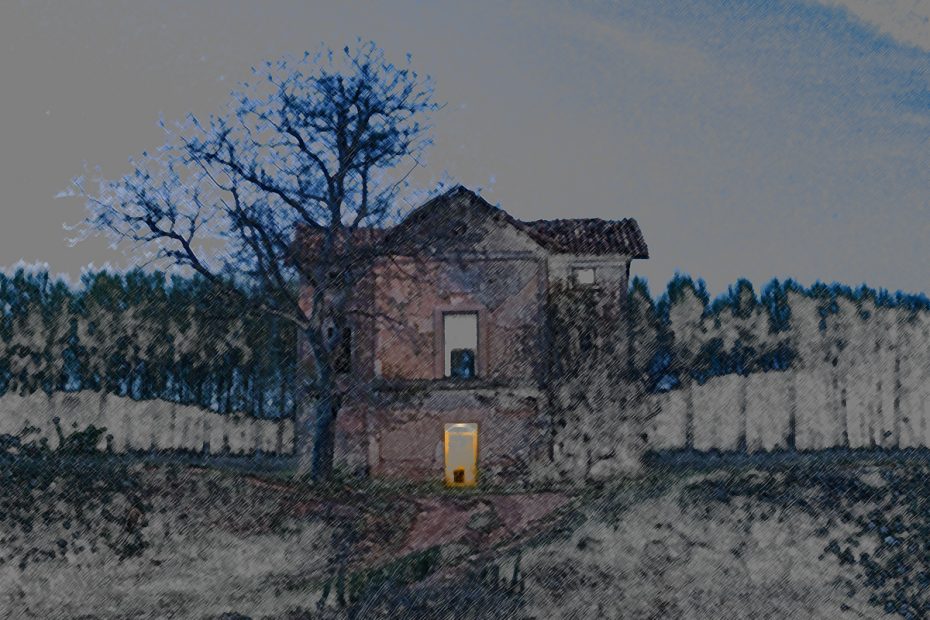 There was once a beautiful old house right on the edge of a lake, surrounded by woods. But no one would live there because a spirit calling itself Sifty-Sifty-San drove everyone away.
In desperation, the owner of the house went to the big city, looking for a man or woman who would be able to banish the spirit of Sifty-Sifty-San. The first night in town, he came across a man named Sam who had spent much of his life banishing ghosts.
As Sam approached the house he whistled cheerfully to himself; the prospect of a good night’s sleep in a fancy house and a big wad of money in his pocket made Sam a happy man.
Darkness came swiftly, and with it came a sinister hissing sound from the forest. Sifty-sifty, the wind whistled in the treetops. Saaaannnn, the waves lapping the shore responded. Outside, a huge gust of wind shook the house and howled down the chimney. Sam shivered and threw another log on the fire.
The wind settled down a bit, and Sam could once again hear the tiny sounds of night. Sifty-sifty, the little frogs croaked. Saaannn, belched the biggest of the bullfrogs. The sound of the waves grew louder. Sam heard a huge thud-thud-thud sound coming from the forest. Sam ran around the house, making sure all the windows and doors were locked.
He had just settled down by the fire for supper when there came a soft cry from the far side of the lake. The frying pan shook in his grip, and he hastily put it back on the fire and pulled a Bible out of his pack. The cry came again, louder. A strange gust of air blew through the house bringing with it a strange musty smell, like the dust in a graveyard.
Out on the lake, Sam heard a soft voice chanting: “I am Sifty-Sifty-San. I’m here on the lake, but where is the man?” Sam froze in place, and the wind picked up again, howling down the large chimney.
“I am Sifty-Sifty-San,” a sinister voice hissed from the shore of the lake. “I’m here on the shore, but where is the man?” Sam dropped his Bible in his fright. His hands were shaking too much to grip anything, and the dusty, decaying smell coming through the window seemed to dull his thoughts and numb his body.
“I am Sifty-Sifty-San,” a terrible, howling voice called from the front of the house. “I’m here on the porch, but where is the man?” Abandoning food, Bible, bag, and sanity, Sam wrestled desperately with the back window, trying to open it wide enough to climb through. He heard the front doors slam open with a bang, and down the passageway came the thud-thud-thudding of footsteps. Then the kitchen door slammed inward, and a huge shadow with burning yellow eyes appeared in the frame.
“I am Sifty-Sifty-San,” a horrible, blood-chilling voice bellowed. “I’m here in the house with the trespassing man!”
“No you ain’t, on account of I’m gone,” shouted Sam, springing through the window, glass, wood frame, and all. He hightailed it back to town faster than a jackrabbit.
And that was the last time anybody went near the old house on the lake. If it hasn’t fallen to pieces by now, then Sifty-Sifty-San may be there still.