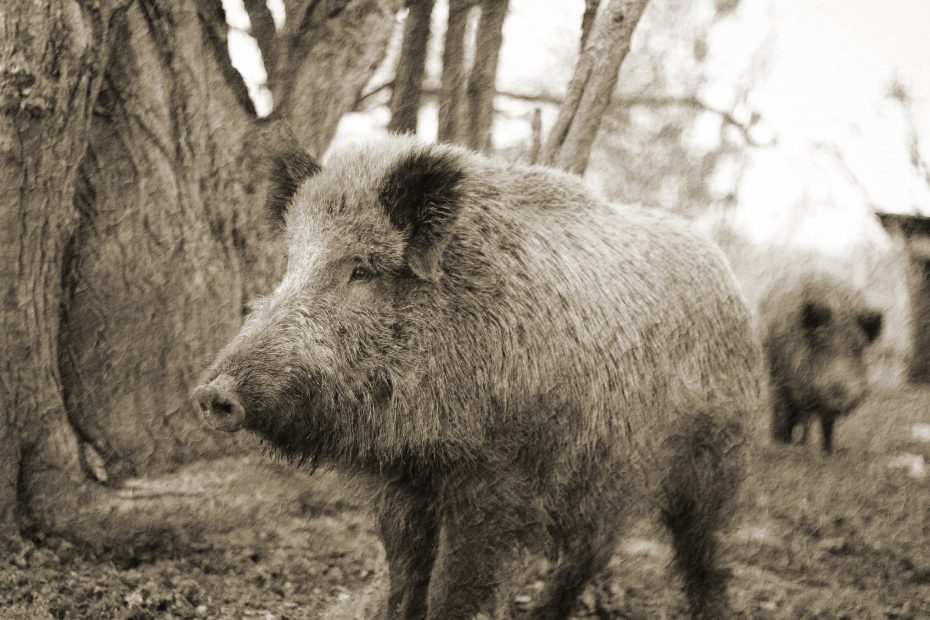 Way back in the deep woods there lived a scrawny old woman who had a reputation for being the best conjuring woman in the Ozarks. With her bedraggled black-and-gray hair, funny eyes – one yellow and one green – and her crooked nose, Old Betty was not a pretty picture, but she was the best there was at fixing what ailed a man, and that was all that counted.

Old Betty’s house was full of herbs and roots and bottles filled with conjuring medicine. The walls were lined with strange books brimming with magical spells. Old Betty was the only one living in the Hollow who knew how to read; her granny, who was also a conjurer, had taught her the skill as part of her magical training.

Just about the only friend Old Betty had was a tough, mean, ugly old razorback hog that ran wild around her place. It rooted so much in her kitchen garbage that all the leftover spells started affecting it. Some folks swore up and down that the old razorback hog sometimes walked upright like man. One fellow claimed he’d seen the pig sitting in the rocker on Old Betty’s porch, chattering away to her while she stewed up some potions in the kitchen, but everyone discounted that story on account of the fellow who told it was a little too fond of moonshine.

“Raw Head” was the name Old Betty gave the razorback, referring maybe to the way the ugly creature looked a bit like some of the dead pigs come butchering time down in Hog-Scald Hollow. The razorback didn’t mind the funny name. Raw Head kept following Old Betty around her little cabin and rooting up the kitchen leftovers. He’d even walk to town with her when she came to the local mercantile to sell her home remedies.

Well, folks in town got so used to seeing Raw Head and Old Betty around the town that it looked mighty strange one day around hog-driving time when Old Betty came to the mercantile without him.

“Where’s Raw Head?” the owner asked as he accepted her basket full of home-remedy potions. The liquid in the bottles swished in an agitate manner as Old Betty said: “I ain’t seen him around today, and I’m mighty worried. You seen him here in town?”

“Nobody’s seen him around today. They would’ve told me if they did,” the mercantile owner said. “We’ll keep a lookout fer you.”

“That’s mighty kind of you. If you see him, tell him to come home straightaway,” Old Betty said. The mercantile owner nodded agreement as he handed over her weekly pay.

Old Betty fussed to herself all the way home. It wasn’t like Raw Head to disappear, especially not the day they went to town. The man at the mercantile always saved the best scraps for the mean old razorback, and Raw Head never missed a visit. When the old conjuring woman got home, she mixed up a potion and poured it onto a flat plate.

“Where’s that old hog got to?” she asked the liquid. It clouded over and then a series of pictures formed. First, Old Betty saw the good-for-nothing hunter that lived on the next ridge sneaking around the forest, rounding up razorback hogs that didn’t belong to him. One of the hogs was Raw Head. Then she saw him taking the hogs down to Hog-Scald Hollow, where folks from the next town were slaughtering their razorbacks. Then she saw her hog, Raw Head, slaughtered with the rest of the pigs and hung up for gutting. The final picture in the liquid was the pile of bloody bones that had once been her hog, and his scraped-clean head lying with the other hogsheads in a pile.

Old Betty was infuriated by the death of her only friend. It was murder to her, plain and simple. Everyone in three counties knew that Raw Head was her friend, and that lazy, hog-stealing, good-for-nothing hunter on the ridge was going to pay for slaughtering him.

The light from the windows disappeared as if the sun had been snuffed out like a candle. Dark clouds billowed into the clearing where Old Betty’s cabin stood, and the howl of dark spirits could be heard in the wind that pummeled the treetops.

Betty continued the chant until a bolt of silver lightning left the plate and streaked out threw the window, heading in the direction of Hog-Scald Hollow.

When the silver light struck Raw Head’s severed head, which was piled on the hunter’s wagon with the other hog heads, it tumbled to the ground and rolled until it was touching the bloody bones that had once inhabited its body. As the hunter’s wagon rumbled away toward the ridge where he lived, the enchanted Raw Head called out: “Bloody bones, get up and dance!”

Immediately, the bloody bones reassembled themselves into the skeleton of a razorback hog walking upright, as Raw Head had often done when he was alone with Old Betty. The head hopped on top of his skeleton and Raw Head went searching through the woods for weapons to use against the hunter. He borrowed the sharp teeth of a dying panther, the claws of a long-dead bear, and the tail from a rotting raccoon and put them over his skinned head and bloody bones.

Then Raw Head headed up the track toward the ridge, looking for the hunter who had slaughtered him. Raw Head slipped passed the thief on the road and slid into the barn where the hunter kept his horse and wagon. Raw Head climbed up into the loft and waited for the hunter to come home.

It was dusk when the hunter drove into the barn and unhitched his horse. The horse snorted in fear, sensing the presence of Raw Head in the loft. Wondering what was disturbing his usually-calm horse, the hunter looked around and saw a large pair of eyes staring down at him from the darkness in the loft.

The hunter frowned, thinking it was one of the local kids fooling around in his barn.

“Land o’ Goshen, what have you got those big eyes fer?” he snapped, thinking the kids were trying to scare him with some crazy mask.

“To see your grave,” Raw Head rumbled very softly. The hunter snorted irritably and put his horse into the stall.

“Very funny. Ha,ha,” The hunter said. When he came out of the stall, he saw Raw Head had crept forward a bit further. Now his luminous yellow eyes and his bears claws could clearly be seen.

“Land o’ Goshen, what have you got those big claws fer?” he snapped. “You look ridiculous.”

“To dig your grave…” Raw Head intoned softly, his voice a deep rumble that raised the hairs on the back of the hunter’s neck. He stirred uneasily, not sure how the crazy kid in his loft could have made such a scary sound. If it really was a crazy kid.

Feeling a little spooked, he hurried to the door and let himself out of the barn. Raw Head slipped out of the loft and climbed down the side of the barn behind him. With nary a rustle to reveal his presence, Raw Head raced through the trees and up the path to a large, moonlight rock. He hid in the shadow of the huge stone so that the only things showing were his gleaming yellow eyes, his bear claws, and his raccoon tail.

When the hunter came level with the rock on the side of the path, he gave a startled yelp. Staring at Raw Head, he gasped: “You nearly knocked the heart right out of me, you crazy kid! Land o’ Goshen, what have you got that crazy tail fer?”

“To sweep your grave…” Raw Head boomed, his enchanted voice echoing through the woods, getting louder and louder with each echo. The hunter took to his heels and ran for his cabin. He raced passed the old well-house, passed the wood pile, over the rotting fence and into his yard.
But Raw Head was faster. When the hunter reached his porch, Raw Head leapt from the shadows and loomed above him. The hunter stared in terror up at Raw Head’s gleaming yellow eyes in the ugly razorback hogshead, his bloody bone skeleton with its long bear claws, sweeping raccoon’s tail and his gleaming sharp panther teeth.

“Land o’ Goshen, what have you got those big teeth fer?” he gasped desperately, stumbling backwards from the terrible figure before him.

“To eat you up, like you wanted to eat me!” Raw Head roared, descending upon the good-for-nothing hunter. The murdering thief gave one long scream in the moonlight. Then there was silence, and the sound of crunching.

Nothing more was ever seen or heard of the lazy hunter who lived on the ridge. His horse also disappeared that night. But sometimes folks would see Raw Head roaming through the forest in the company of his friend Old Betty. And once a month, on the night of the full moon, Raw Head would ride the hunter’s horse through town, wearing the old man’s blue overalls over his bloody bones with a hole cut-out for his raccoon tail. In his bloody, bear-clawed hands, he carried his raw, razorback hogshead, lifting it high against the full moon for everyone to see.