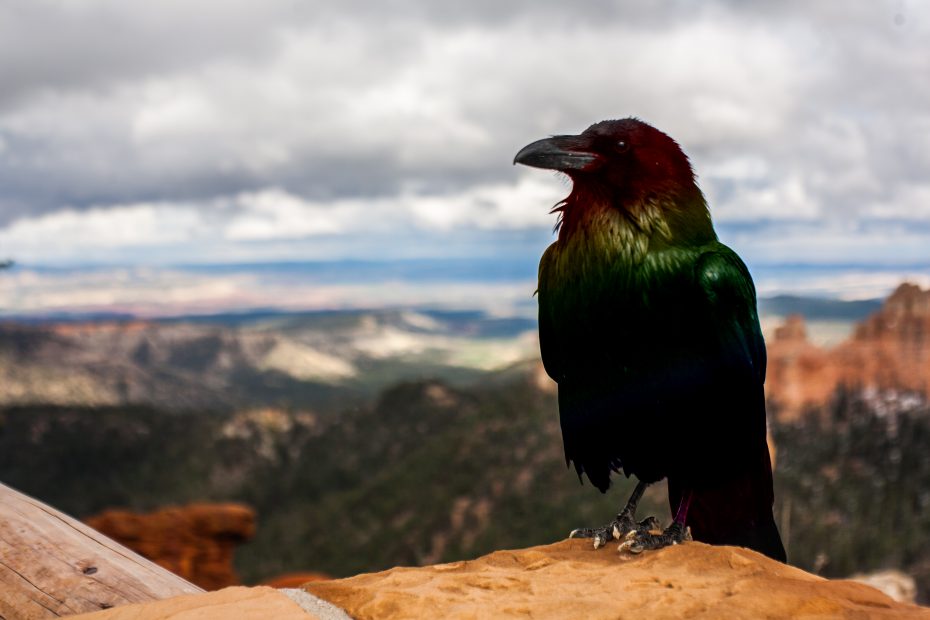 From the Lenni Lenape Tribe

“We must send a messenger to Kijiamuh Ka’ong, the Creator Who Creates By Thinking What Will Be,” said Wise Owl. “We must ask him to think the world warm again so that Spirit Snow will leave us in peace.”

The animals were pleased with this plan. They began to debate among themselves, trying to decide who to send up to the Creator. Wise Owl could not see well during the daylight, so he could not go. Coyote was easily distracted and like playing tricks, so he could not be trusted. Turtle was steady and stable, but he crawled too slowly. Finally, Rainbow Crow, the most beautiful of all the birds with shimmering feathers of rainbow hues and an enchanting singing voice, was chosen to go to Kijiamuh Ka’ong.

It was an arduous journey, three days up and up into the heavens, passed the trees and clouds, beyond the sun and the moon, and even above all the stars. He was buffeted by winds and had no place to rest, but he carried bravely on until he reached Heaven. When Rainbow Crow reached the Holy Place, he called out to the Creator, but received no answer. The Creator was too busy thinking up what would be to notice even the most beautiful of birds. So Rainbow Crow began to sing his most beautiful song.

The Creator was drawn from his thoughts by the lovely sound, and came to see which bird was making it. He greeted Rainbow Crow kindly and asked what gift he could give the noble bird in exchange for his song. Rainbow Crow asked the Creator to un-think the snow, so that the animals of Earth would not be buried and freeze to death. But the Creator told Rainbow Crow that the snow and the ice had spirits of their own and could not be destroyed.

“What shall we do then?” asked the Rainbow Crow. “We will all freeze or smother under the snow.”

“You will not freeze,” the Creator reassured him, “For I will think of Fire, something that will warm all creatures during the cold times.”

The Creator stuck a stick into the blazing hot sun. The end blazed with a bright, glowing fire which burned brightly and gave off heat. “This is Fire,” he told Rainbow Crow, handing him the cool end of the stick. “You must hurry to Earth as fast as you can fly before the stick burns up.”

Rainbow Crow nodded his thanks to the Creator and flew as fast as he could go. It was a three-day trip to Heaven, and he was worried that the Fire would burn out before he reached the Earth. The stick was large and heavy, but the fire kept Rainbow Crow warm as he descended from Heaven down to the bright path of the stars. Then the Fire grew hot as it came closer to Rainbow Crows feathers. As he flew passed the Sun, his tail caught on fire, turning the shimmering beautiful feathers black. By the time he flew passed the Moon, his whole body was black with soot from the hot Fire. When he plunged into the Sky and flew through the clouds, the smoke got into his throat, strangling his beautiful singing voice.

By the time Rainbow Crow landed among the freezing-cold animals of Earth, he was black as tar and could only Caw instead of sing. He delivered the fire to the animals, and they melted the snow and warmed themselves, rescuing the littlest animals from the snow drifts where they lay buried.

It was a time of rejoicing, for Tindeh – Fire – had come to Earth. But Rainbow Crow sat apart, saddened by his dull, ugly feathers and his rasping voice. Then he felt the touch of wind on his face. He looked up and saw the Creator Who Creates By Thinking What Will Be walking toward him.

“Do not be sad, Rainbow Crow,” the Creator said. “All animals will honor you for the sacrifice you made for them. And when the people come, they will not hunt you, for I have made your flesh taste of smoke so that it is no good to eat and your black feathers and hoarse voice will prevent man from putting you into a cage to sing for him. You will be free.”

Then the Creator pointed to Rainbow Crow’s black feathers. Before his eyes, Rainbow Crow saw the dull feathers become shiny and inside each one, he could see all the colors of the rainbow. “This will remind everyone who sees you of the service you have been to your people,” he said, “and the sacrifice you made that saved them all.”

And so shall it ever be.