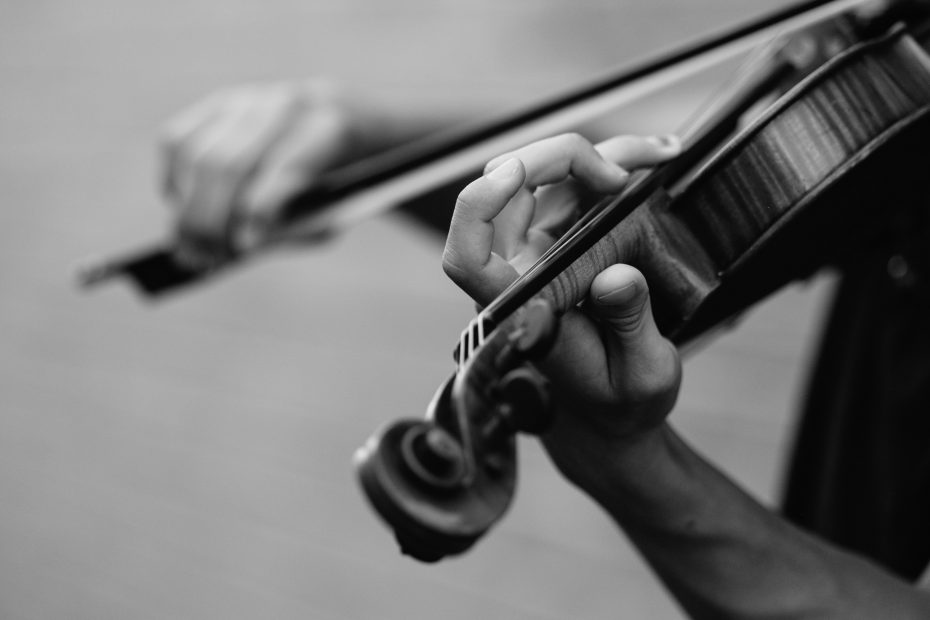 “Young man, I’ll give you five dollars a week to be caretaker in Printz Hall,” Mr. Quidd said angrily to fiddler Peter Matthews, on an autumn evening.

Peter Matthews had been taunting the old gentleman with being afraid to sleep in his own domain, for Printz Hall was reputed to be haunted. With the eyes of all the tavern loungers on him, he could hardly decline so flattering a proposition. After some hemming and hawing, he agreed.

Matthews played but two or three more tunes that evening, but his heart wasn’t in it. When Quidd finished his mulled cider and departed, Peter too made his homeward way in thoughtful mood.

Printz Hall stood in a lonely, weed-grown garden near Chester, Pennsylvania, and thither repaired Peter, as next day’s twilight shut down, with a mattress, blanket, comestibles, his beloved fiddle, and a flask of whiskey. Ensconcing himself in the room that was least depressing in appearance he stuffed rags into the vacant panes, lighted a candle, started a blaze in the fireplace, and ate his supper.

“Not so bad a place, after all,” mumbled Peter, as he warmed himself at the fire and the flask; then, taking out his violin, he began to play.

The echo of his music emphasized the emptiness of the house, the damp got into the strings so that they sounded tubby, and there were unintentional quavers in the melody whenever the trees swung against the windows and splashed them with rain, or when a distant shutter fell a-creaking. Finally, he stirred the fire, bolted the door, snuffed his candle, took a courageous pull at the liquor, flung off his coat and shoes, rolled his blanket around him, stretched himself on the mattress, and fell asleep.

Peter was awakened by—well, he could not say what, exactly, only he became suddenly as wide awake as ever he had been in his life and listened for some sound that he knew was going to come out of the roar of the wind and the slamming, grating, and whistling about the house. Yes, there it was: a tread and a clank on the stair. The door, so tightly bolted, flew open, and there entered a dark figure with steeple-crowned hat, cloak, jackboots, sword, and corselet.

The terrified fiddler wanted to howl, but his voice was gone.

“I am Peter Printz, governor-general of his Swedish Majesty’s American colonies, and builder of this house,” said the figure. “’Tis the night of the autumnal equinox, when my friends meet here for revel. Take thy fiddle and come. Play, but speak not.”

And whether he wished or no, Peter was drawn to follow the figure, which he could make out by the phosphor gleam of it. Down-stairs they went, doors swinging open before them, and along corridors that clanged to the stroke of the specter’s boot heels.

They came to the ancient reception-room, and as they entered it Peter was dazzled. The floor was smooth with wax, logs snapped in the fireplace, though the flame was somewhat blue, the old hangings and portraits looked fresh, and in the light of wax candles a hundred people, in the brave array of old times, walked, curtsied, and seemed to laugh and talk together.

As the fiddler appeared, every eye was turned on him in a disquieting way, and when he addressed himself to his bottle, from every throat came a hollow laugh. Finding his way to a chair he sank into it and put his instrument in position. At the first note the couples took hands, and as he struck into a jig they began to circle swiftly, leaping wondrous high.

Faster went the music, for the whiskey was at work in Peter’s noddle, and wilder grew the dance. It was as if the storm had come in through the windows and was blowing these people hither and yon, around and around. The fiddler vaguely wondered at himself, for he had never played so well, though he had never heard the tune before.

All at once, Governor Printz loomed in the middle of the room. Extending his hand, he ordered the dance to cease.

“Thou bast played well, fiddler,” he said, “and shalt be paid.”

Then, at his signal, came two men tugging at a strong box that Printz unlocked. It was filled with gold pieces.

“Hold thy fiddle bag,” commanded the governor, and Peter did so, watching, open mouthed, the transfer of a double handful of treasure from box to sack. Another such handful followed, and another. At the fourth Peter could no longer contain himself. He forgot the injunction not to speak, and shouted gleefully, “Lord Harry! Here’s luck!”

There was a shriek of demon laughter, the scene was lost in darkness, and Peter fell insensible.

In the morning a tavern-haunting friend, anxious to know if Peter had met with any adventure, entered the house and went cautiously from room to room, calling on the watcher to show himself. There was no response. At last, they stumbled on the empty whiskey bottle, and knew that Peter must be nearby. Sure enough, there he lay in the great room, with dust and mold thick on everything, and his fiddle smashed into a thousand pieces.

Peter, on being awakened, looked ruefully about him, then sprang up and eagerly demanded his money.

“What money?” asked his friend.

The fiddler clutched at his green bag, opened it, shook it; there was nothing. Nor was there any delay in Peter’s exit from that mansion, and when, twenty-four hours after, the house went up in flames, he averred that the ghosts had set it afire, and that he knew where they brought their coals from.