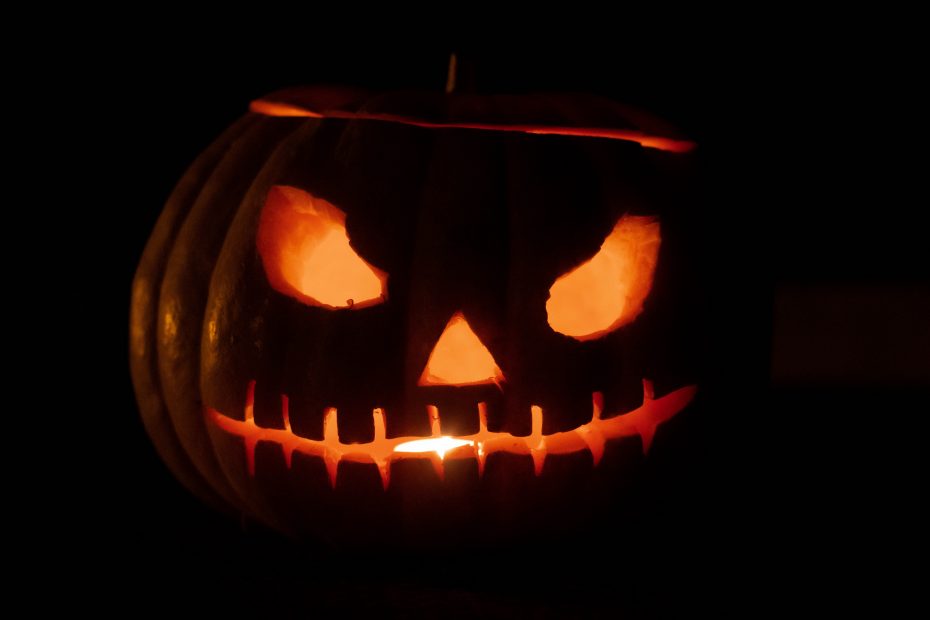 After a long day of unlucky hunting, I found myself stuck in the middle of the marshlands for the night, without a flashlight or a lantern to guide my stumbling steps. So I settled beside a fallen log to rest until daylight. As I tossed and turned, I recalled the story my great-uncle told me about a ghost that haunted the marshlands.

There was once a man named Jack who was a nasty fellow. He beat his wife and kids and was an all-around bad chap. Jack got worse and worse as the years rolled by. But finally Jack’s body got so wore out that he died. He went up to heaven, but Saint Peter refused to let such a wretched fellow in. Then he went to Hell, but the Devil barred the door as soon as he saw Jack coming and wouldn’t let him in either. “Go away and don’t come back,” the Devil told Jack.

“How am I supposed to get back in the dark?” Jack grumbled. “Give me a lantern.”

So the Devil threw a chunk of molten fire out to Jack, who took it for his lantern and went back to earth, where he wanders forever through the swamps and marshlands of the earth, a bitter spirit whose only delight was in luring the unwary to their doom with his lamp.

At this juncture in my musings, I happened to look out over the marshes and noticed a blinking light in the fog.

“Is that you, Jack O’Lantern?” I called jovially.

“Jack, (jack, jack),” a voice whispered back. I was seriously spooked. I clutched my gun to my chest, the hairs on my arms standing on end. Had that been an echo of my voice, or was someone out here with me?

“Who’s there?” I shouted, trying to sound brave and menacing. I waved my gun around. “Show yourself at once.”

“Jack, (jack, jack)” the voice hissed from a completely different section of the swamp. A light blinked on and then off. On and then off.

Shudders ran up my spine at the sound of that ghastly voice coming from nowhere. I huddled up against the log, wanting something firm at my back. Suddenly, the story of the Jack O’Lantern didn’t seem so funny.

My heart was pounding so hard it made my chest hurt. I strained my ears in the silence that fell over the swamp.

“Jack, (jack, jack)” the voice hissed from somewhere to my left this time. The light blinked on, off, on…I counted ten heartbeats this time before it went off.

The voice sounded closer. I held very still, my instincts screaming at me to hold my breath and not move until the menace had passed. The voice came again, far off to the right. “Jack, (jack, jack)” it hissed. The light came on, off, on…off.

It’s moving away, I thought, relaxing just a bit. Feeling safer. There was a long, long, long silence. Nothing stirred, not the wind in the grass, not the frogs or turtles in the water, not the crickets or night insects.

“Jack, (jack, jack)” the voice hissed softly, right into my ear. And I looked up into the glowing red eyes and twisted face of the Jack O’Lantern.

I screamed, and lashed out at it with my gun. I ran a few steps, tripped and fell over, knocking my head on a sharp stone. For a moment I saw stars, and I felt blood pouring from my scalp. But the Jack O’Lantern was right behind me. I had to get away. I rolled and fell into a deep pool. I plunged underneath the water, flailing desperately against ropelike grasses that tried to keep me down. My head finally burst out of the water, and I gasped desperately for air, treading water as best I could with my trembling limbs and aching head. I heard the creature laugh in the mist.

“Jack, (jack, jack)” the voice hissed delightedly, and the light blinked on, off, on right over my head, blinding my dazed eyes as horror flowed through me and froze my limbs so I could no longer swim. For a long moment, the grotesque face and red eyes of the Jack O’Lantern loomed out of the mist before my petrified gaze.

My head started to swim with pain from my bleeding skull. The evil face above me, lit by its bright light, whirled around and around, growing dimmer as my eyes started to glaze. I was vaguely aware that I should keep swimming, keep trying to make my way to the edge of the pool, but the effort was too much for my suddenly heavy limbs. I barely noticed myself plunging down and down into the watery depths of the pool, too stunned by my injury to fight my way to the surface a second time.

Then there was only darkness, and silence, and a voice hissing in cold triumph:
“Jack, (jack, jack).”