How the Rainbow Was Made 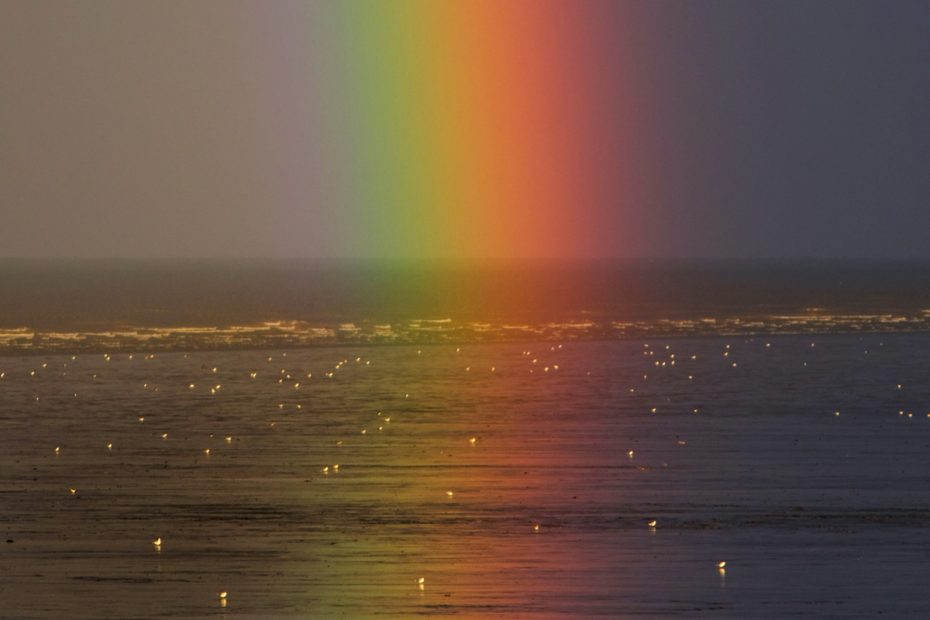 A Creation Tale from the Ojibwe Nation

One day when the earth was new, Nanabozho looked out the window of his house beside the wide waterfall and realized that all of the flowers in his meadow were exactly the same off-white color. How boring! He decided to make a change, so he gathered up his paints and his paintbrushes and went out to the meadow.

Nanabozho sat down in the tall grass and arranged his red and orange and yellow and green and blue and violet paint pots next to him. Then he began to paint the flowers in his meadow in many different colors. He painted the violets dark blue and the tiger lilies orange with brown dots. He made the roses red and pink and purple. He painted the pansies in every color combination he could think of. Then he painted every single daffodil bright yellow. Nanabozho hummed happily to himself as he worked in the brilliant daylight provided by Brother Sun.

Overhead, two little bluebirds were playing games with each other. The first little bluebird would chase his friend across the meadow one way. Then they would turn around and the second bluebird would chase him back the other way. Zippity-zip went the first bluebird as he raced across the sky. Zappity-zing went the second bluebird as he chased him in the brilliant sunshine.

Occasionally, Nanabozho would shade his eyes and look up…up into the endless blue sky to watch the two little birds playing. Then he went back to work, painting yellow centers in the white daisies. Above him, the two birds decided to see how fast they could dive down to the green fields below them. The first bluebird sailed down and down, and then pulled himself up sharply just before he touched the ground. As he soared passed Nanabozho, his right wing dipped into the red paint pot. When the second bluebird dove toward the grass, his left wing grazed the orange paint pot.

Nanabozho scolded the two birds, but they kept up their game, diving down toward the grass where he sat painting and then flying back up into the sky. Soon their feet and feathers were covered with paint of all colors. Finally Nanabozho stood up and waved his arms to shoo the birds away.

Reluctantly, the bluebirds flew away from Nanabozho and his paint pots, looking for another game to play. They started chasing each other again, sailing this way and that over top of the giant waterfall that stood next to Nanabozho’s house. Zippity-zip, the first bluebird flew through the misty spray of the waterfall. The first bluebird left a long red paint streak against the sky. Zappity-zing, the second bluebird chased his friend through the mist, leaving an orange paint streak. Then the birds turned to go back the other way. This time, the first bluebird left a yellow paint streak and the second left a pretty blue-violet paint streak. As they raced back and forth, the colors grew more vivid. When Brother Sun shone on the colors, they sparkled radiantly through the mist of the waterfall.

Below them, Nanabozho looked up in delight when the brilliant colors spilled over his meadow. A gorgeous arch of red and orange and yellow and green and blue and violet shimmered in the sky above the waterfall. Nanabozho smiled at the funny little bluebirds and said: “You have made a rainbow!”

Nanabozho was so pleased that he left the rainbow permanently floating above his waterfall, its colors shimmering in the sunshine and the misting water. From that day to this, whenever Brother Sun shines his light on the rain or the mist, a beautiful rainbow forms. It is a reflection of the mighty rainbow that still stands over the waterfall at Nanabozho’s house.

You can read more Michigan folklore and ghost stories in Spooky Michigan by .