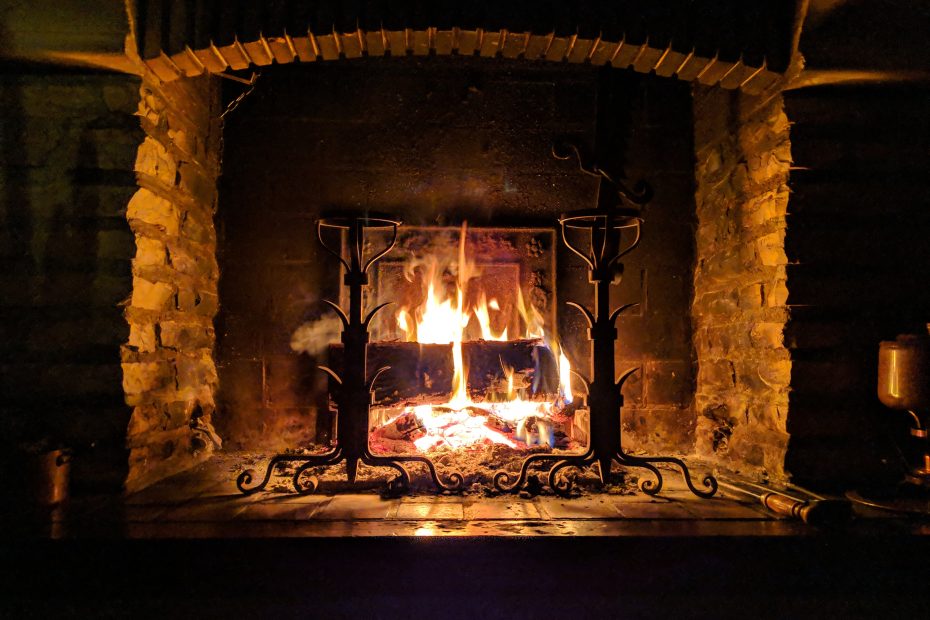 The soft thud of following footsteps echoed behind him as he hurried through the snowflakes toward home.  They kept pace with him, quickening when he quickened and slowing when he slowed.  It was creepy.  His flesh crawled at the sound and he sped up, cursing himself for walking home alone from the midnight Christmas Mass.

Normally not a pious man, the middle-aged bachelor had suddenly been struck by a wish to hear the old Christmas songs sung once again by a church choir, and had walked across town to attend the service.  Now he regretted his choice, as he passed dark house after dark house in the snowy night, and the footsteps ever followed.

He sped up until he was nearly running, and skidded into his street.  A few more paces brought him to the bottom of his front steps, and as he dashed up them, he realized suddenly that the following footsteps had ceased abruptly.  He glanced behind him at the cross-street from which he had just turned and saw only one pair of footprints in the snow-covered street when there should have been two.  He frowned in puzzlement, and then shuddered as a cold breeze struck him, driving snow against his collar, and slammed against the door.  Almost, it seemed to pass through the door, but that was superstitious nonsense.  His hand was shaking as he unlocked the front door and hurried inside.

He expected darkness, but was delighted to see the yellow glow of firelight coming from his study doorway upstairs.  His old housekeeper, whom he thought firmly asleep in her attic bedroom, must have lit the fire pending his return.  He shrugged out of his coat and paused for a moment, amazed to find it still warm and dry, though he had walked for more than a mile through a snow-storm.  It was almost as if he’d been walking in a bubble of calm air, though he remembered the soft snowflakes hitting his face when he first stepped out of church.  Before the mysterious footsteps began…

His shudder was interrupted by a shout of greeting as his old friend Andy came hurrying out of the study.  His whole face lit up in a grin at the unexpected surprise.  The two men shook hands heartily and retreated back to the warmth of the firelight, talking so fast they stumbled over each other’s words.  Andy had left town years ago to take a government job in D.C., and they hadn’t seen each other since.

Nearly an hour passed before it occurred to him that his guest might be hungry.  His offer of a meal was instantly accepted, but Andy was unwilling to leave the comfort of the fire to eat in the kitchen, so he jogged downstairs alone to fetch some food.  He didn’t wonder at his friend’s reluctance to join him in the kitchen.  Andy had looked very pale and had kept shivering with cold while they talked.  He hoped his friend wasn’t ailing for anything.

A few moments later he was back with warmed up meat and potatoes and a couple of glasses of beer, apologizing profusely as he handed Andy a plate, for the mismatched dinnerware.  Andy just laughed and hunkered down to eat.  When they were both finished, he showed his friend to a guest room and then tumbled into his own bed to sleep, all his apprehension caused by mysterious footsteps forgotten in the visit of his friend.

He jumped out of bed Christmas morning and dashed immediately downstairs to the guest room to rouse his friend.  Andy wasn’t there, and the bed had not been slept in.  That was odd.  He ran down to look in the study, but Andy wasn’t there either, and one plate full of food was sitting on the end-table beside his old friend’s chair.  It was completely untouched, though he’d seen Andy eating from it the night before!  Skin creeping at the thought, he ran to the kitchen and asked his housekeeper if she’d seen Andy.  But the housekeeper had seen no one either the previous night or this morning.  He flopped down on the bottom step of the staircase, completely baffled.  Where had Andy gone?  It was a mystery that plagued him all Christmas Day, and he did not enjoy his holiday dinner at all, a fact that annoyed his housekeeper.

He was awakened the next morning from a restless sleep by the sound of the front door bell.  He stumbled out of bed and was splashing water from the bedside pitcher onto his sleepy eyes when a knock came at his bedroom door.  When he answered, his housekeeper handed him a telegram that had just arrived.  As she hurried back downstairs to prepare his breakfast, he opened it curiously, not knowing who would be telegraphing him so urgently.

As he read the telegram, he started to tremble.  The message was short and to the point:  Andy’s family regretted to inform him that his old friend Andy had passed away on Christmas Eve in his home in Washington D.C.  He sat down hard on the bed, the telegram fluttering away from his hand.  It must have been Andy who had followed him home on Christmas Eve.  That would explain the eerie footsteps and the dry coat in the middle of the snow storm.  He’d spent Christmas Eve with a ghost!

You can read more Wisconsin ghost stories in Spooky Wisconsin, by S.E. Schlosser.