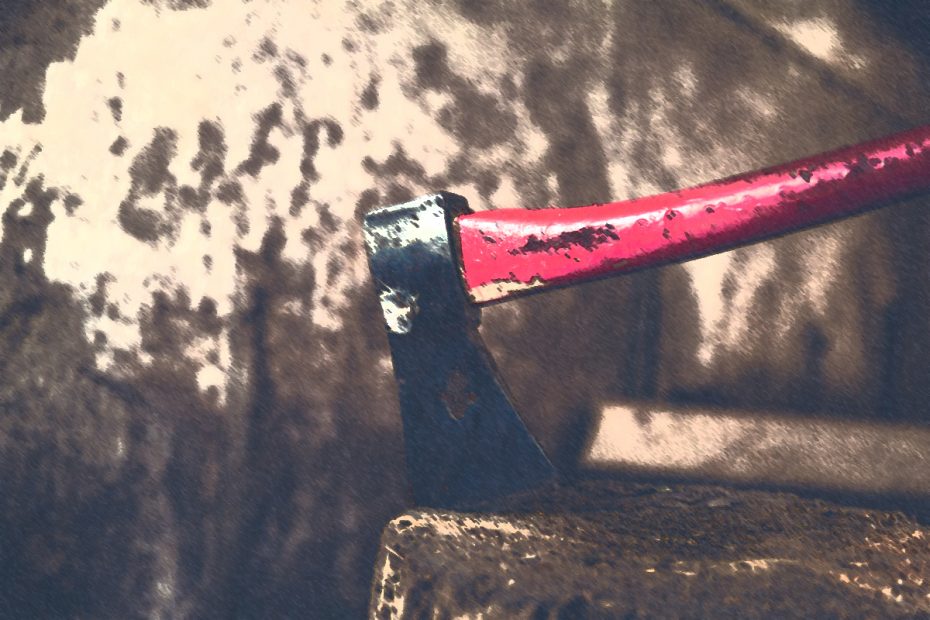 There were warnings all over campus about a Hatchet Man who was supposedly abused and killed a woman in Bloomington.  All the girls were warned to walk in pairs and to stay in brightly lit areas if they had to go out at night.
The sophomore and her roommate were staying in the empty dorm over Thanksgiving break, since both their families were out of the country.  They grown very bored as day followed boring day and night followed boring night.  Tired of staying inside every night for fear of the Hatchet Man, her roommate suggested they have dinner at the local bar, and the sophomore agreed.
The two women had lingered longer than anticipated, and it was almost midnight when the sophomore, more than a little drunk, decided to walk back to the dorm.  Her roommate was busy flirting with the bartender, so she headed into the dark, silent streets alone.  The sophomore had forgotten all about the Hatchet Man warnings.  It wasn’t until she took a shortcut through a dark, creepy alley that she remembered there was a desperate murderer on the loose.
The sophomore shivered, feeling suddenly sober and very much alone.  She felt as if hostile eyes were peering out at her from every menacing shadow and darkened doorway.    She quickened her pace.   Was that heavy breathing she heard behind her?  Were those footsteps walking in time with her own?
The sophomore broke into a run; heart pounding fiercely, sure that someone was following her.   She darted onto the college campus, zigzagged through the buildings and flung herself panting into the dorm.  She pounded up three flights of stairs, down the hall and slammed into her room, locking the door behind her.  It was only then, leaning against the door with her heart racing, that she started to feel foolish.  There was no sound from the hallway.  No footsteps, no heavy breathing.  No hatchet breaking through the wood of the door.  She’d been a fool.
The sophomore staggered to the bathroom to wash up for the night, leaving the door locked behind her.  She kept glancing in the mirror to make sure that everything was secure.  The scene in the mirror was normal.  And there was no sound in the empty dormitory.  Everything was just fine, she told herself.
Then she remembered that her roommate was still at the bar.  She didn’t want her roommate to walk home alone, so she called the bar and asked the manager if he would arrange for her roommate to be brought home in a taxi.  The music in the background was loud, and she wasn’t sure if the manager understood her request.  But at least she’d tried.
The sophomore curled up in bed with the reading lamp on, determined to wait up for her roommate.  But the combination of heavy drinking and her earlier fright sent her into a deep sleep almost at once, and she did not awaken until the sun came pouring in the window, early the next morning.
She woke with a hangover and rolled over, trying not to be sick in the bed.  When she looked across the room, she realized that her roommate wasn’t in the bed on the far wall.  In fact, it looked as if her bed had not been slept in at all!
She rolled to her feet, heart pounding with dread.  Maybe her roommate had spent the night in the lobby?  Her roommate had done that once before when out partying until the wee hours of the morning, saying it was too much trouble to climb three flights of stairs.
With trembling hands, the sophomore unlocked the door and wrenched it open in search of her roommate.  The unmistakable, faintly metallic scent of blood smashed into her nostrils as the door swung open.  That was her only warning before her shocked eyes saw blood spattered all over the walls and floor of the third-floor hallway.  She screamed in terror, leaping backward away from the partially decapitated body of her roommate, which lay dead at her feet.  Her throat was slit from end to end and blood pooled under her dead body.  The nails on her outstretched hand were torn and splintered where they had scratched desperately at the wooden door.
A black shadow lay across her roommate’s body.  She looked up in a daze, her gaze following the black shadow to its source.  Embedded in the window frame near the entrance to the staircase was a bloodstained hatchet, outlined in the light of the rising sun.