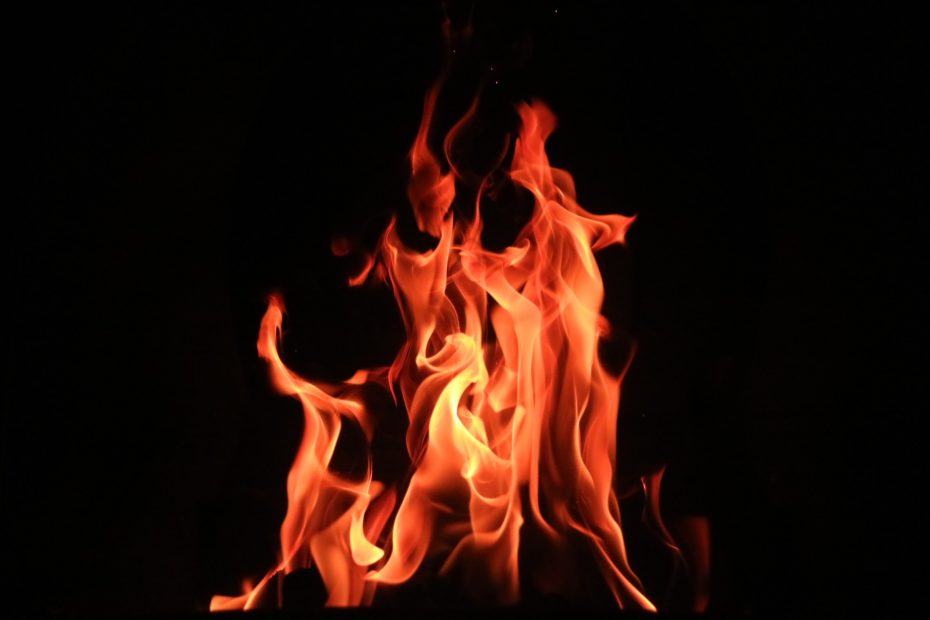 A Myth from the Alabama Tribe

One day, Bear and his people came to a great forest, where they found many acorns lying on the forest floor. Bear set Fire at the edge of the forest, and he and his people began eating acorns. The acorns were crunch and crisp and tasted better than any other acorns Bear and his people had ever eaten. They wandered further and further away from Fire, eating the delicious acorns and seeking out more when the acorn supply grew low.

Fire blazed up merrily for awhile, until it had burned nearly all of its wood. It started to smoke and flicker, then it dwindled down and down. Fire was alarmed. It was nearly out. “Feed me! Feed me!” Fire shouted to Bear. But Bear and his people had wandered deep into the forest, and then did not hear Fire’s cries.

At that moment, Man came walking through the forest and saw the small, flickering Fire. “Feed me! Feed me!” Fire cried in despair.

“What should I feed you?” Man asked. He had never seen Fire before.

“I eat sticks and logs and wood of all kinds,” Fire explained.

Man picked up a stick and leaned it on the North side of Fire. Fire sent its orange-blue flames flickering up the side of the stick until it started to burn. Man got a second stick and laid it on the West side of the fire. Fire, nourished by the first stick, burned brighter and stretched taller and eagerly claimed the second stick. Man picked up a third stick and laid it on the south side of Fire and laid a fourth stick on the East. By this time, Fire was leaping and dancing in delight, its hunger satisfied.

Man warmed himself by the blazing Fire, enjoying the changed colors and the hissing and snapping sound Fire made as it ate the wood. Man and Fire were very happy together, and Man fed Fire sticks whenever it got hungry.

A long time later, Bear and his people came back to the edge of the forest, looking for Fire. Fire was angry when it saw Bear. It blazed until it was white-hot and so bright that Bear had to shade his eyes with both paws. “I do not even know you!” Fire shouted at Bear. The terrible heat rolling of Fire drove Bear and his people away, so they could not take it and carry it away with them.

And now Fire belongs to Man.