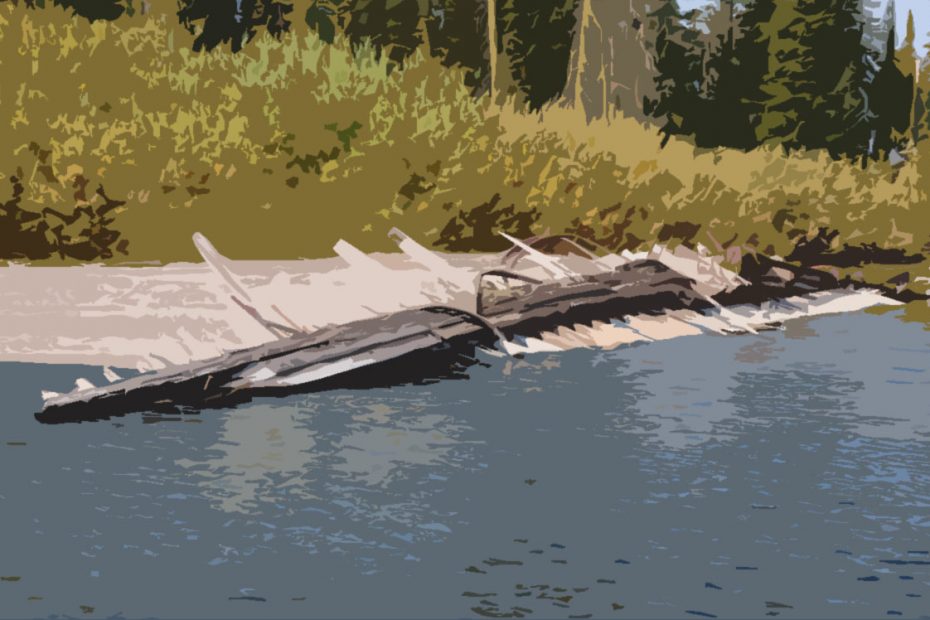 My supervisor radioed me just after sunrise on a warm summer morning in 1929 to report another incident aboard the shipwrecked E.C. Waters out on Stevenson Island.
“A bunch of drunks were boozing and brawling on the boat last night,” he said in a grumpy tone that clearly indicated his lack of morning coffee.
I sighed. Again! I had no idea why so many summer visitors flocked to the wreck of the old steamboat on Stevenson Island, which lay partially submerged beside a sandy beach.
“I want you to head out there and make sure no one got knocked on the head or stranded on the island when the brawl ended,” my supervisor continued.
“Right, boss,” I said.
I hurried down to the marina and headed out in the boat we used for official business. It was a short ride out to Stevenson’s Island. I sighed as I drew closer to the creaky old tub listing precariously on the shore. There were empty beer bottles strewn on the beach and floating in the water, always a sign of trespassers. I moored my craft and gathered up as much trash as I could. Then I cautiously ventured onto the rickety steamboat. Thankfully, I found no bodies huddled asleep in the beer-soaked wreck. Time to check the island.
Stevenson’s Island was 1.3 miles long, and I was going to have to check the whole darn thing, just in case some of the drunks had gone exploring last night. With a sigh, I headed out in a basic search pattern.

By mid-morning, I was hot, grumpy, tired, and convinced I was on a wild-goose chase. There had been no sign of stranded vacationers – drunk or sober. I headed back toward the sunlit beach, ready to return to the main land.

As I came over a tiny rise, a huge wind struck me hard, making me stagger backward a few paces in the suddenly freezing air. In front of me, I saw the lake churning in great waves while a huge storm cloud massed overhead. I saw something big and bulky floating at the edge of the water. Something man-shaped. My heart leapt into my throat, and I rushed forward. Dear God, someone had fallen from the boat last night and hit his head!  My hands felt cold and clammy as I fumbled with the radio at my belt. I had to call this in! But when I spoke into the radio, it only returned static.

I dropped to my knees beside the body; noticing that the sodden clothing was old-fashioned, dating from long before 1900. The drowned man looked rather like a fur trapper or explorer from the era when Yellowstone was first discovered. I checked his neck for a pulse. There was no pulse.  I turned the body over and stared into a pair of bulging brown eyes on a blue-white face.

And then, in between one breath and the next, the body vanished. Suddenly my hand was gripping empty air instead of an old-fashioned jacket. I reeled backward with a gasp and landed on my rump in the sand. Where had the corpse gone?
I glanced frantically over the calm, sparkling waters of the still lake, searching for the body of the drowned man. The warm summer wind caressed my face as my brain registered the change in scenery. What had happened to the approaching storm? Where were the huge, wind-swept swells that had frightened me so much when I came over the rise?
I scrambled to my feet and stood hyperventilating with my head between my legs, arms braced on my knees. This couldn’t be happening. But I knew it was. Storm, cold wind, and corpse had vanished in a heartbeat. They had been shades of a former time, a former accident. So that was why the man’s clothes had been so old-fashioned.

Spooked by the incident, I unmoored the official park boat and leapt in, glad to get away from Stevenson Island. Folks said that Lake Yellowstone never gave up its dead. Apparently, neither did the island. I turned my craft and headed back to the main land and (hopefully) sanity.  No more ghosts for me!