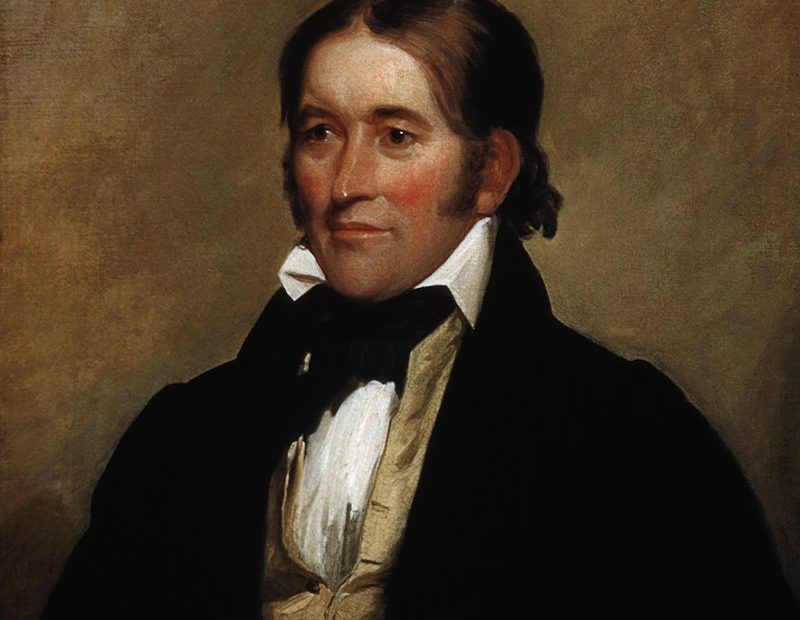 Well, they say that Davy Crockett, the most famous bear hunter in the U.S. of A, once ran for election in Congress. He was campaigning in town one day, standing on a big ol’ stump and talking to a big ol’ crowd, when one of the men complained, saying he was mighty thirsty. ‘Course, that set the whole crowd off, don’t ya know. They said they wanted free drinks, and they wanted Davy to pay fer ’em out of his own pocket. If he didn’t pay, he wouldn’t get elected.

Davy knew he’d better do something afore his campaign ended right then and there. So, he took the whole crowd to the local bar – what they called a shantee back in them days – and Davy himself led the singing and ordered drinks for the whole crew. ‘Course, the barman wanted to see his money, and Davy didn’t have none. But he told the fellow to wait, and he lit off into the woods with his rifle, watched by the amused and derisive crowd. Didn’t take him but a minute to spy himself a coon, and Davy shot it first go.
The crowd wasn’t near so skeptical when he reappeared with his prize, all skinned and ready to give to the barman. Back in them days, a coonskin was as good as money, and the barman accepted it immediately, and soon the whole crowd was afloat, drinking rum like there was no tomorrow.

When the coonskin was all paid out, Davy went back outside to his stump to start another speech about the election and what he meant to do for all the voters if he was elected. But news had got around, and it turned out this crowd was jest as thirsty as the first one. Davy took them all to the shantee, wondering if he’d have to go out and shoot another coon. Then he spied a bit of the coonskin sticking out between the logs that were used to build the bar. The barman must have stuck the skin under the counter to keep it safe. Davy leaned up against the counter and stuck his right hand down until he was gripping the piece of coonskin and gave it a good hard jerk. The coonskin slid right through the logs and into his hand. Triumphantly, Davy slapped it onto the counter and ordered a round of drinks from the barman to the shouted delight of the crowd.

As they were drinking, Davy made the rounds of the crowd, campaigning with all his might. He kept an eye on the bartender, and sure nuff, the man put the coonskin behind the counter in the same place as before, with part of it sticking through a gap in the logs. So, Davy meandered over the bar when the drinks started running low and paid for another round with the same coonskin. He treated his new friends again, and again, and again by the same trick.

Davy Crockett purchased ten rounds with the same coonskin before the day was over, and that joke secured the election for him. Even the bartender had to allow that anyone that clever had the “real grit for them in Congress” and the man running against him might as well “whistle jigs to a milestone,” cause the milestone was the only one that would vote fer the opponent.

Davy Crockett won his election to Congress, and he became known as the “coonskin congressman.” He first introduced himself to his new colleagues in congress by saying: “I am that same Davy Crockett, fresh from the back woods, half-horse, half-alligator, a little touched with the snapping turtle…I can whip my weight in wildcats…and eat any man opposed to Jackson.”

Davy Crockett served three terms in Congress, and only lost his bid for a fourth term when he took up a position that was opposed to Jackson.