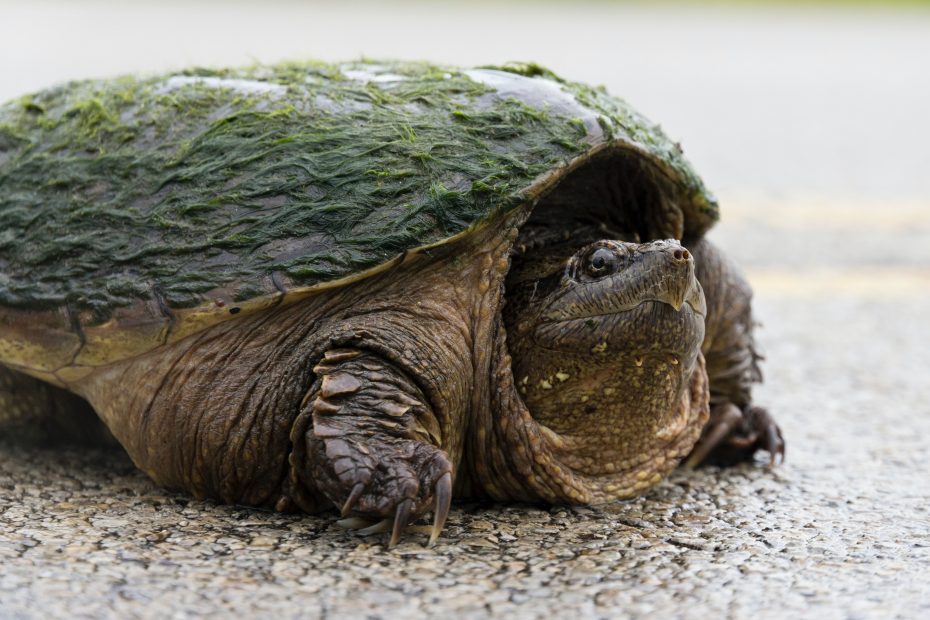 Since he couldn’t catch Brother Rabbit nohow, Brother Fox decided that he’d get even with Old Man Tarrypin instead. He started walking beside the pond every day, hoping to find the turtle out of the water.

One morning, as he was taking his daily stroll, Brother Fox saw Old Man Tarrypin sitting right in the center of the road. The old turtle looked hot and bothered about something. He kept shaking his head back and forth and he was panting like he was out of breath.

“I was a-strolling in the field beside my pond when the farmer came along and set it on fire,” Old Man Tarrypin gasped. “I had to run and run, but that ol’ fire was faster than me, so I curled up in my shell while it passed right over me! My shell is hotter than the noon-day sun, and I think I done singed my tail!”

“Let me have a look,” said Brother Fox. So Old Man Tarrypin uncurled his tail and poked it out of his shell. Immediately, Brother Fox grabbed him by the tail and swung him right off the ground.

Well, Old Man Tarrypin begged and begged Brother Fox not to drown him. He’d rather go back into the fire in the field on account of he’d kind of gotten used to being burned.

Brother Fox swung the poor old turtle back and forth by his tail, trying to decide what to do. Putting Old Man Tarrypin into the fire was a tempting idea, but then he remembered how the old turtle had curled up into his shell so the fire couldn’t touch him. Brother Fox frowned. Fire was no good, then.

Brother Fox decided to drown Old Man Tarrypin instead. He tucked the turtle under his arm and carried him down to the springhouse by the pond.

“I ain’t making no promises,” Brother Fox retorted. “You’ve played too many tricks on me, Brother Tarrypin.”

Brother Fox thrust him into the water and began bouncing him up and down.

“Oh, I is drowning,” shouted Old Man Tarrypin when his head bounced out of the water. “Don’t let go of my tail, Brother Fox or I’ll be drowned for sure!”

“That’s the idea, Brother Tarrypin,” Brother Fox yelled back and let go of his tail.

Immediately Old Man Tarrypin splashed down and down into the water and thumped onto the mud on the bottom, kerplicky-splat.

That’s when Brother Fox remembered that Old Man Tarrypin lived in the pond, and there was never any fear of him drowning, nohow! He could hear him laughing from the bottom of the pond: “I-dare-ya-ta- come-down-‘ere”.

Brother Fox jumped up and down in fury. Old Man Tarrypin had escaped him!

From the other side of the pond, Brother Bull Frog called out: “Knee-deep! Knee-deep!”

Brother Fox glared at the pond, and then looked back at Brother Bull Frog. “It’s only knee-deep?” he asked suspiciously.

Well, thought Brother Fox, if it was only knee deep, then he’d have no trouble catching Old Man Tarrypin.

Well. That did it. Brother Fox ran right up to the edge of the pond. Leaning over, he looked into the water and saw another fox staring at him.

Brother Fox was thrilled. He didn’t know he had a cousin. Now that there were two foxes, catching Old Man Tarrypin would be a cinch! BBrother Fox leaned down to shake hands with his new-found brother and toppled right down into the deep water of the pond.

All of the frogs laughed and laughed at the trick they had played on Brother Fox, and Old Man Tarrypin started swimming up from the bottom of the pond, his red eyes fixed on BBrother Fox’s tail. Brother Fox knew that the old turtle wanted to pull him down under that water and drown him, so he learned to swim mighty quick! With much splashing and squirming and kicking, Brother Fox made it to the edge of the pond, where he jumped out and ran away as fast as he could, while Brother Bull Frog laughed and the little frogs shouted with glee.

The last thing he heard as he rounded the corner was the voice of Old Man Tarrypin calling: “I-dare-ya-ta- come-down-‘ere”.