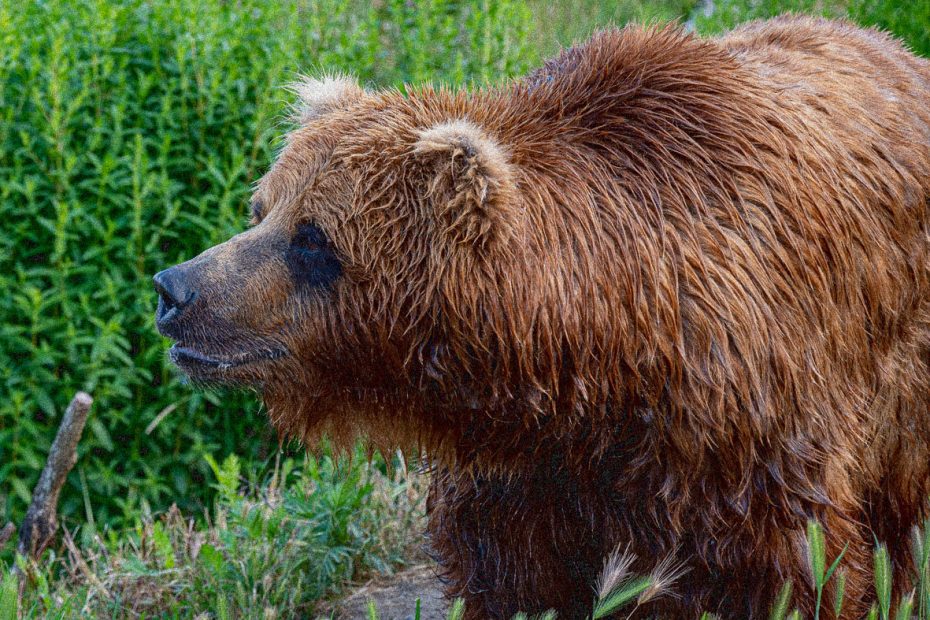 Well now, out of all the animals that live in the woods, Brother Bear had the biggest house.  The house was warm and cozy on the inside, but it was also very crowded on account of Brother Bear having him a plump wife and two plump young ‘uns named Simon and Susannah.

The Bear family did most everything together.  They’d eat together and they’d wash together and they’d catch fish together and they’d play games together.  They were real close.  And at night they’d all crowd together into their house and crawl into their giant bed to get some sleep.  But they were all so plump that they could barely fit on the big bed, and there was hardly room around the bed to walk without hitting the walls.  So the family slept nose to nose to nose all night long and they had to eat all their meals outside on the porch ‘cause there was no room to eat inside the big warm house.

Well now, one evening in late autumn, Brother Bear and his family crowded into their warm house to get some shut eye.  They’d just settled down to sleep when someone came a-knocking on their front door. A-bang, a-bang, a-bang went the door knocker.  All four bears jumped in surprise when they heard the sound.   Simon Bear bumped heads with Susannah Bear, who howled in pain and rolled over clutching her head in her paws. Susannah Bear bumped into her mama when she rolled over, and her mama fell off the bed and landed on top of her husband, who’d just got out of the bed so’s he could see who was a-knocking on the door. It was all a big kerfluffle  with the whole family a-yelling and a-fussing, and the stranger a-bang, a-bang, a-banging on the door knocker.

“Who is it?” Brother Bear finally howled through the keyhole.  “Why are you a-knocking on my door so late at night?”

“It’s Brother Skunk,” the stranger called through the door.  “The nights are getting right cold out here with winter coming, so I’m looking for a job as a housekeeper.  I thought you folks might need someone to help do chores around the place in exchange for a warm spot to sleep at night.”

“A housekeeper?” roared Brother Bear.  “We ain’t got no room for a housekeeper in this here house.  We can barely turn around without bumping into one another as it is!”

“That’s why you need a housekeeper,” Brother Skunk cried through the door.  “I am very good at clearing out a place.  Why, after I get through with your house, there will be so much space I could sleep each night in a cozy bed and eat all my meals inside!”

Well, this was a tempting proposition.  Missus Bear looked at her husband and Susannah Bear looked at Simon Bear.  Imagine living into a house that was so empty they could bring their dinner inside and eat it without poking somebody in the eye!

“We should hire him, Pa,” Simon said.

“We could really use some more room in this house,” add Susannah wistfully, rubbing her sore head with one paw.

So Brother Bear invited Brother Skunk to come into his big warm house to be the new housekeeper for the Bear family.  Brother Skunk ambled inside and eyed all the plump bears watching him eagerly as cold moonlight streamed through the open door.  Then he turned around, lifted his black and white tail, and blasted the air of that cozy warm house with his very special scent.   Brother Bear and his family took one whiff of this terrible perfume, and they went a-running for the woods so fast that they didn’t even stop to shut the door behind them.

Once the big house was cleared of all those plump bears, Brother Skunk had plenty of room to sleep each night in a cozy bed and eat all of his meals inside, just like he said.  And what happened to the Bear family?  I dunno but I think they might still be running, trying to get away from Brother Skunk’s smell!