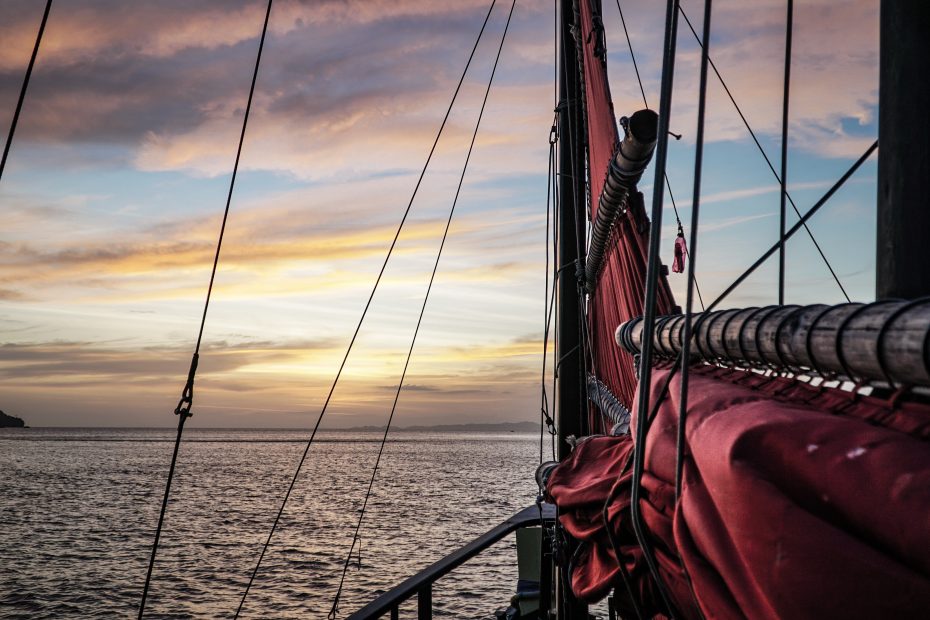 The nefarious pirate Blackbeard (who’s real name was Edward Teach) was a tall man with a very long black beard that covered most of his face and extended down to his waist. He tied his beard up in pigtails adorned with black ribbons. He wore a bandolier over his shoulders with three braces of pistols and sometimes he would hang two slow-burning cannon fuses from his fur cap that wreathed his head in black smoke. Occasionally, he would set fire to his rum using gunpowder, and he would drink it, flames and all. Many people thought he was the Devil incarnate.

For twenty-seven months, Blackbeard terrorized the sailors of the Atlantic and the Caribbean, ambushing ships and stealing their cargo, killing those who opposed him, often attacking in the dim light of dawn or dusk when his pirate ship was most difficult to see. He would sail under the flag of a country friendly to the nationality of the ship he was attacking, and then hoist his pirate flag at the last moment. When prisoners surrendered willingly, he spared them. When they did not, his magnanimity failed. One man refused to give up a diamond ring he was wearing and the pirate cut the ring off, finger and all. Once Blackbeard blockaded Charleston, South Carolina with his ships, taking many wealthy citizens hostage until the townspeople met his ransom. Later, Blackbeard ran one of his ships – the Queen Anne’s Revenge – aground. Some say he did it on purpose because he wanted to break up the pirate fleet and steal the booty for himself.

In November of 1718, Blackbeard retreated to his favorite hideaway — called Teach’s Hole — off Ocracoke Island. There, he hosted a wild pirate party with drinking, dancing and large bonfires. The party lasted for days, and several North Carolina citizens sent word to Governor Alexander Spotswood of Virginia. Governor Spotswood immediately ordered two sloops, commanded by Lieutenant Robert Maynard of the Royal Navy, to go to Ocracoke and capture the pirate.

On November 21, 1718, Maynard engaged Blackbeard in a terrible battle. One of Maynard’s ships were between Blackbeard and freedom. Blackbeard sailed his ship – the Adventure – in towards shore. It looked like the pirate was going to crash his ship, but at the last second the ship eased through a narrow channel. One of the pursuing Navy ships went aground on a sand bar when they tried to pursue the Adventure. Blackbeard fired his cannons at the remaining ship and many of Maynard’s men were killed. The rest he ordered below the deck under cover of the gun smoke, hoping to fool the pirates into thinking they had won. When the pirates boarded the ship, Maynard and his men attacked the pirates.

Outnumbered, the pirates put up a bloody fight. Blackbeard and Maynard came face to face. They both shot at each other. Blackbeard’s shot missed Maynard, but Maynard’s bullet hit the pirate. Blackbeard swung his cutlass and managed to snap off Maynard’s sword blade near the hilt. As Blackbeard prepared to deliver the death-blow, one of Maynard’s men cut Blackbeard’s throat from behind. Blackbeard’s blow missed its mark, barely skinning Maynard’s knuckles. Infuriated, Blackbeard fought on as the blood spouted from his neck. Maynard and his men rushed the pirate. It took a total of five gunshots and about twenty cuts before Blackbeard fell down dead.

Maynard seemed to think that the only way to ensure that Blackbeard was dead was to remove his head. They hung the head from the bowsprit and threw the pirate’s body overboard. As the body hit the water, the head hanging from the bowsprit shouted: “Come on Edward” and the headless body swam three times around the ship before sinking to the bottom.

From that day to this, Blackbeard’s ghost has haunted Teach’s Hole, forever searching for his missing head. Sometimes, the headless ghost floats on the surface of the water, or swims around and around and around Teach’s Hole, glowing just underneath the water. Sometimes, folks see a strange light coming from the shore on the Pamlico Sound side of Ocracoke Island and know that it is “Teach’s light”. On night’s that the ghost light appears, if the wind is blowing inland, you can still hear Blackbeard’s ghost tramping up and down and roaring: ‘Where’s my head?’