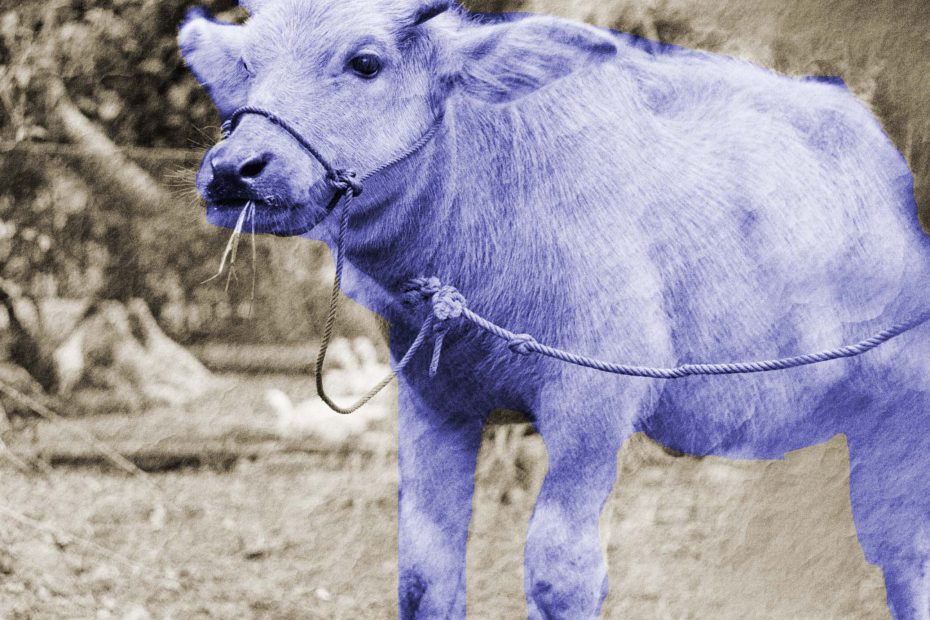 Paul got Benny for nothing from a farmer near Bangor, Maine. There was not enough milk for the little fellow so he had to be weaned when three days old. The farmer only had forty acres of hay and by the time Benny was a week old he had to dispose of him for lack of food. The calf was undernourished and only weighed two tons when Paul got him. Paul drove from Bangor out to his headquarters camp near Devil’s Lake, North Dakota that night and led Benny behind the sleigh. Western air agreed with the little calf and every time Paul looked back at him he was two feet taller.

When they arrived at camp Benny was given a good feed of buffalo milk and flapjacks and put into a barn by himself. Next morning the barn was gone. Later it was discovered on Benny’s back as he scampered over the clearings. He had outgrown his barn in one night.

Benny was very notional and would never pull a load unless there was snow on the ground so after the spring thaws they had to white wash the logging roads to fool him.

Gluttony killed Benny. He had a mania for pancakes and one cook crew of two hundred men was kept busy making cakes for him. One night he pawed and bellowed and threshed his tail about till the wind of it blew down what pine Paul had left standing in Dakota. At breakfast time he broke loose, tore down the cook shanty and began bolting pancakes. In his greed he swallowed the red-hot stove. Indigestion set in and nothing could save him. What disposition was made of his body is a matter of dispute. One oldtimer claims that the outfit he works for bought a hind quarter of the carcass in 1857 and made corned beef of it. He thinks they have several carloads of it left.

Another authority states that the body of Benny was dragged to a safe distance from the North Dakota camp and buried. When the earth was shoveled back it made a mound that formed the Black Hills in South Dakota.

Citation: Laughead, William B. The Marvelous Exploits of Paul Bunyan: As Told in the in the Camps of the White Pine Lumbermen for Generations. Chicago: The Red River Lumber Company, 1922. Edited by S.E. Schlosser. This story is in the public domain and is part of the cited work.