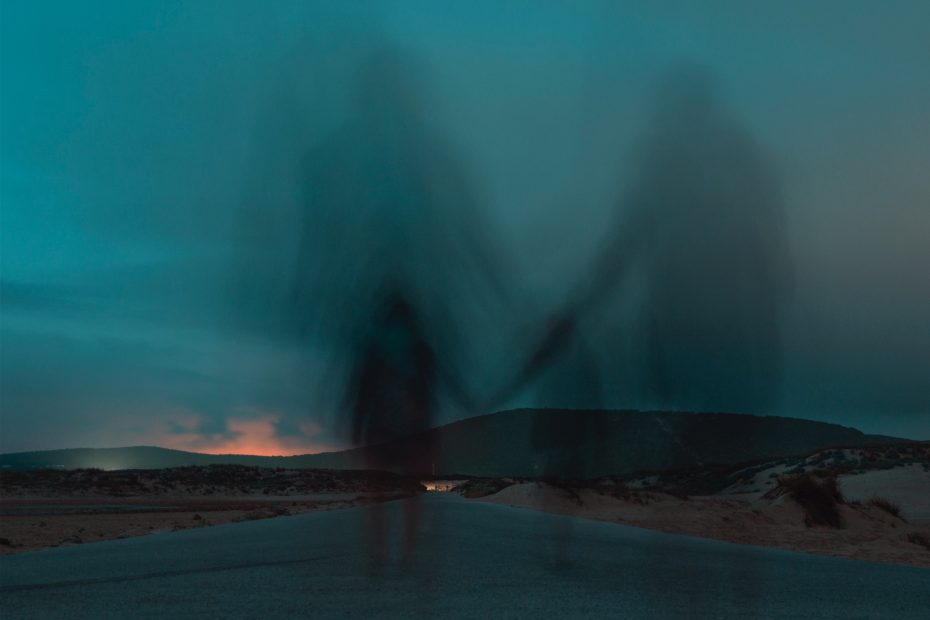 “Hell, with the fires out,” is what the Bad Lands of Dakota have been called. The fearless nomenclature fits the place. It is an ancient sea-bottom, with its clay strata worn by frost and flood into forms like pagodas, pyramids, and terraced cities. Labyrinthine canons wind among these fantastic peaks, which are brilliant in color, but bleak, savage, and oppressive.

Deer course over the castellated hills and rattlesnakes bask at the edge of the crater above burning coal seams. In the region of the butte called “Watch Dog,” there is a banshee in the desert whose cries have chilled the blood that would not have cooled at the sight of a bear or panther. By moonlight, when the scenery is most suggestive and unearthly, and the noises of wolves and owls inspire uneasy feelings, the ghost is seen on a hill a mile south of the Watch Dog, her hair blowing, her arms tossing in strange gestures.

If any who, for good or ill, pass the haunted butte at night, the rocks are lighted with phosphor flashes and the banshee sweeps upon them. As if wishing to speak, she stands beside them in an attitude of appeal, but if asked what she wants, she flings her arms aloft and with a shriek that echoes through the blasted gulches for a mile she disappears and an instant later is seen wringing her hands on her hilltop. Cattle will not graze near the haunted butte and the cowboys keep aloof from it, for the word has never been spoken that will solve the mystery of the region or quiet the unhappy banshee.

The creature has a companion, sometimes, in a glowing skeleton that trudges about the ash and clay and haunts the camps in a search for music. If the skeleton a tune, he will sit outside the door and nod in time to it. A violin left within his reach is eagerly seized and will be played on through half the night. The music is wondrous: now as soft as the stir of wind in the sage, anon as harsh as the cry of a wolf or startling as the stir of a rattler.

As the east begins to brighten the music grows fainter, and when it is fairly light it has ceased altogether. But he who listens to it must on no account follow the player when the skeleton moves away, for it will lead him into rocky pitfalls, whence escape is hopeless, and the music will intoxicate, madden, and will finally charm his soul from his body.